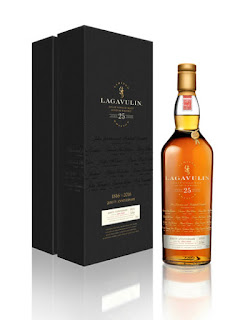 Lagavulin
The iconic Islay distillery of Lagavulin is continuing its 200th anniversary celebrations with the announcement of another special bottling - the Lagavulin 25 years old.  It follows another limited edition 8 years old bottling that was released earlier in the year.  This expression is the first 25 years old from Lagavulin to be fully matured in ex-sherry casks and pays homage to the many craftsmen that have worked at the distillery over its 200 year history.  The bottling will be available from September through specialist whisky retailers and the distillery shop.  There are just 8,000 bottles and each will cost £799.

“For two centuries, Lagavulin has been crafted through the hands of hard working Islay residents; from peat cutters to warehousemen; the characters that make Lagavulin what it is today share a passion for producing an award winning Islay dram, and I am proud to say that I am part of this passionate group of people.”
Georgie Crawford - Distillery Manager at Lagavulin.

Details for the inaugural Tasmanian Whiskey Week have been announced.  The event will run for nine days (July 22-31) and will feature all of the island states whisky distilleries, including names such as Lark, Nant and Sullivan's Cove.  Special events will be held at each distillery, some of which have not been opened to the public before, along with various other industry events being held at a number of other locations.

Events include behind-the-scenes tours, meeting distillers and various gastronomic and whisky pairing evenings.  The nine days will culminate in the first ever Whisky Live show in Hobart, Tasmania's capital.  For further information and to book tickets for events - please visit www.taswhiskyweek.com. 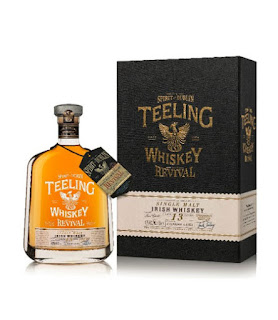 Teeling Whiskey Co.
The Teeling Whiskey Company have announced the second bottling of The Revival expression to celebrate the first anniversary of their Teeling distillery in Dublin.  The Revival Volume II is bottled at 13 years of age and was distilled in 2002.  It has been matured for 12 years in ex-bourbon casks before being transferred to ex-Calvados brandy casks, which are 250 litres in size.  The whiskey has not been chill filtered and is bottled at 46% ABV.  There are 10,000 bottles and no indication of price was given in the press release.

The Revival Volume II will be initially released in selected retailers in Ireland, including at the distillery shop and Dublin Airport. It will then see a wider general release in selected markets including Belgium, Denmark, Germany, Holland, Italy and the UK.

"The one-year anniversary of our award winning distillery and visitor centre is a major milestone in the history of the Teeling Whiskey Company.  We released The Revival Volume I when the distillery first opened and once again we have a very special whiskey with the first ever Calvados cask matured Irish whiskey."
Jack Teeling - Founder & Managing Director at Teeling Whiskey Co.

posted by Whisky For Everyone at 6:24 AM

Liquorworld is best place to Buy whisky online and Sullivans Cove whisky , you can buy whisky in Australia anytime and buy Rare Scotch Whisky with one call.

eToro is the ultimate forex broker for novice and pro traders.