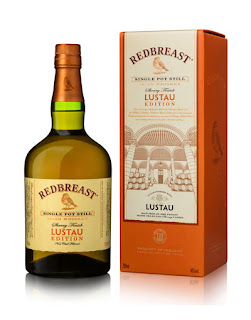 The Redbreast Lustau Edition celebrates the historic working relationship between brand owners Irish Distillers, based in Midleton Co. Cork, and the Emilio Lustau bodega, based in Jerez de la Frontera in Spain. The new whiskey becomes the fifth permanent addition to the core range of Redbreast single pot still whiskeys - it joins the 12, 15 and 21 year olds and 12 years old Cask Strength versions.  It has been initially matured in a combination of ex-bourbon and ex-sherry casks before being transferred for one year to specially selected sherry butts that have previously held Lustau Oloroso sherry.

"This whiskey represents the mutual bond that we have built up over time with our old friends at Emilio Lustau. Language is no barrier to this marriage of Irish and Spanish craft."
Billy Leighton – Head Blender at Irish Distillers.


The first documention of Redbreast as a brand came in 1912 when a poster for Redbreast JJ Liqueur appeared. It is believed the name refers to the robin redbreast bird and was a nickname given to the brand by the Chairman of the W & A Gilbey whiskey company. He was a keen bird watcher and it was said to be his favourite bird.

The JJ in the name refers to John Jameson & Son, who worked in partnership with Gilbeys and produced the whiskey for them in Dublin.  Redbreast single pot still whiskey is currently produced in County Cork in southern Ireland at the Midleton distillery, which produces a staggering 19 million litres of whiskey a year in the numerous styles needed for the Irish Distillers portfolio.

The Bodegas Lustau was founded as a boutique winery in 1896 by José Ruiz-Berdejo.  After his death in 1930 his son-in-law Emilio Lustau Ortega took control of the business. He moved it to Jerez and in the early 1950s began exporting their sherries across the world for the first time.

The company became part of the Cabellero Group in 1990 and moved to its current location in the centre of Jerez in 2000. Lustau is now one of the most awarded sherry brands in international competition and boasts a portfolio of over 40 different sherries and vermouths.

The Redbreast Lustau Edition is bottled at 46% ABV and is non chill-filtered.  It was officially launched to world media and retailers at a lavish event at Bodegas Lustau in Jerez at the beginning of September and is available in four key markets – Canada, France, Ireland and the UK.  It will also be available in the USA from mid-October.  The recommended retail price is £55/€69.


Our tasting notes
The colour is golden yellow with a tint of amber and the nose is understated and very classy.  There is a lovely mix of aromas - toasted almond, sultana and baking spice (especially cinnamon) - and these combine superbly with further aromas of toffee, candied orange and background malty cereals.

On the palate the whiskey is soft and feels luxurious.  There are plenty of dried tropical fruit notes initially (think of peach, apricot and mango especially) and these are accentuated by an extra sweet honeycomb-like characteristic.  This sweetness is balanced by an almost perfect combination of warming wood spices (imagine that cinnamon based baking spice again with a touch of fresh sawdust) with hints of earthy gingerbread and bittersweet malted cereals.  Background notes of black cherry, candied orange peel and caramelised nuts add further depth and complexity.

The finish is extremely pleasant with the earthy baking spices linger long after the sweet and fruity notes have faded.  These disappear slightly quickly but the spices make up for this, creating a slightly dry and warming feel.

What's the verdict?
This is not the massive sherry bomb whiskey that the group of tasters was expecting.  The ex-sherry cask notes are there but very subtle and the whiskey is better for it.  This compliments the more subtle notes and allows the quality of the single pot still spirit to shine through.

The Redbreast Lustau Edition is a class act and one that shows just how elegant ex-sherry cask whiskeys can be when sympathetically matured in quality casks.  This whiskey is sure to feature in our Top 10 Whiskies of 2016 list and is a serious contender for the top spot.

eToro is the most recommended forex trading platform for new and full-time traders.