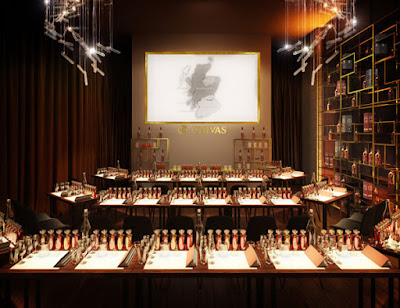 The popular Scotch premium blended whisky brand of Chivas Regal have announced an innovative whisky bar pop-up and 'Art of Blending' consumer experience in London.  The bar and events will take place at The Truman Brewery in Shoreditch and is designed to introduce consumers to the brand and give them the opportunity to learn about blending and create their own whiskies.

The Art of Blending Experience will open on October 3 as part of London Cocktail Week and then run until late November.  During the one hour session, hosted by Chivas Regal experts, consumers will learn about the history and heritage of the brand, taste samples of malt and grain whiskies from the different regions of Scotland and then create and take home their own blend.

Tickets for each session are priced at £22 each and numbers are limited.  For more information and to book tickets, please visit www.chivas.com/theblend.

The Glasgow-based independent bottling company of Hunter Laing & Co have finally received planning permission to build their first distillery. As we reported back in January, this will be located on the north eastern coast of the famous whisky island of Islay in the Hebrides. It will be named Ardnahoe and draw water from the nearby Ardnahoe Loch.

The four acre site will include distilling operations, warehousing facilities and a visitor centre with additional scope for expansion. The project will cost an estimated £8 million and the first spirit is hoped to be flowing by the end of 2017.  The expected capacity is said to be around 200,000 litres for the first year, with full capacity designed to be 450-500,000 litres.

“This is the natural next step in the journey of Hunter Laing & Co. The opportunity to be part of the incredible tradition of whisky-making on Islay is a dream come true.”
Stewart Laing - Managing Director at Hunter Laing & Co.

For one week only, the iconic Islay distillery of Laphroaig will be projecting the thoughts of whisky fans on to its famous white warehouse walls.  These sit right on the sea shore and the initiative, named Big Opinions, will form part of the brand's award winning #OpinionsWelcome campaign.  Big Opinions will see tweets from around the world selected by John Campbell, the Distillery Manager at Laphroaig, and beamed on to the wall.

Big Opinions will run for the week of October 11-15 and will show the real-time Twitter feed.  Whisky fans can be involved by simply using the #BigOpinions or #OpinionsWelcome handles and then describing their impressions of Laphroaig whisky in 140 characters or less.  Every tweeter chosen will receive a photo and short video of their message 'up in lights'.  You can also watch a live feed via www.laphroaig.com/opinions. 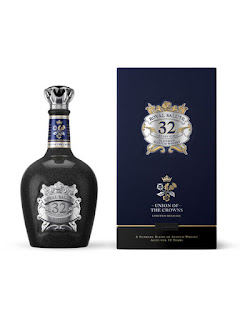 Royal Salute
The super premium blended Scotch brand of Royal Salute have announced a new expression for the core range.  The Royal Salute Union of the Crowns is a blend featuring single malt and single grain whiskies with a minimum age of 32 years.  This includes stocks from the closed distilleries of Caperdonich and Lochside, plus rare and old casks from Speyside distilleries such as Braeval, Glen Keith, Longmorn and Tormore. The whisky is so named as a tribute to King James VI, who in 1603 brought together three kingdoms to create the modern version of the British monarchy.

Royal Salute was originally created to celebrate the coronation of the current Queen Elizabeth II and has strong connections to royalty.  The whisky is presented in a porcelain flagon that is decorated with an embossed silver plaque and a silver and black stone stopper. The story of the Union of the Crowns is depicted on the neck with a rose, a thistle and a shamrock - the symbol of each of the three kingdoms.

The Royal Salute Union of the Crowns will be available exclusively in the global travel retail market from the end of September.  The recommended retail price is $380 US, £290 or €340.

posted by Whisky For Everyone at 7:24 PM