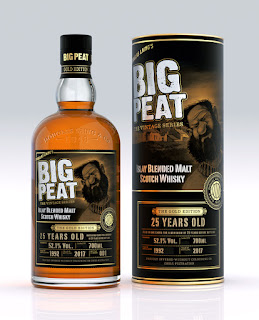 Douglas Laing
The independent bottler Douglas Laing & Co have announced two more new whiskies. The first sees their popular Big Peat expression released with an age statement, and a big one at that. The Gold Edition 25 years old is a blended malt and includes rare Islay single malts distilled at Ardbeg, Bowmore and Port Ellen amongst others. There are just 3,000 bottles, which will be available globally, and these are bottled at the natural cask strength of 52.1% ABV. It is also non  chill-filtered and of natural colour. No indication of price was given on the press release. 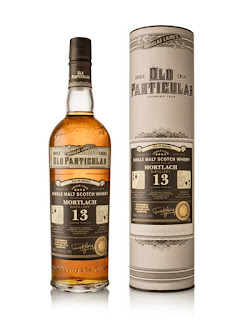 The second release sees the final release in their single cask Consortium of Cards series. The Old Particular Mortlach 13 years old 'Ace of Spades' has been finished in a single ex-Pedro Ximinez sherry butt, which has yielded just 521 bottles. It follows the Laphraoig 18 years old 'Queen of the Hebrides', which kicked off the series in earlier this year, the Ben Nevis 20 years old 'King of the Hills' and the Port Dundas 28 years old 'Crackerjack'. It bottled at xx.x% ABV and is of natural colour and non chill-filtered.

For more details on both releases, please visit www.douglaslaing.com. 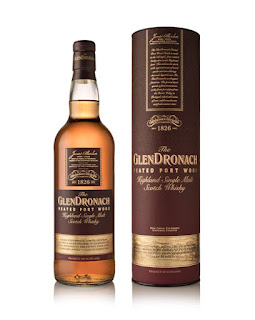 Glendronach
The east Highland distillery of Glendronach has announced the release of a limited edition that celebrates its historical use of Port casks and of producing slmoky whisky. The Glendronach Peated Port Wood has been made in the 'old Highland style', using malted barley dried with Highland peat smoke. This has then been part-matured in Port pipe casks sourced from the Douro valley in Portugal. It has been bottled at 46% ABV and is non chill-filtered and of natural colour. A bottle will cost £65 and is available in selected global markets now.

"The Glendronach Peated Port Wood may be considered a surprising expression from this distillery but it is in keeping with historical styles. Peat imbues the spirit with regional notes of wood smoke and smouldering charcoal, layered over Glendronach’s archetypal fruitiness."
Rachel Barrie - Whisky Maker at Glendronach.

Haig Club
The single grain whisky brand of Haig Club have launched a new responsible drinking campaign entitled Leave As You Arrived. The initiative promotes drinking in moderation and kicks off with a shirt film featuring David Beckham, the global face of Haig Club and business partner to the brand. The 60-second film, directed by Jonas Akerlund, plays out in reverse to the cool soundtrack of 'Carte Postale' by Skole. The film will feature across various media platforms and include the hashtag #LeaveAsYouArrived.


“We have a belief about quality over quantity and the importance of drinking in moderation. #LeaveAsYouArrived was designed to showcase these benefits on a night out. Haig Club believes that looking as good leaving the bar as when you arrived, is the epitome of style.”
Ronan Beirne - Global Brand Director of Haig Club. 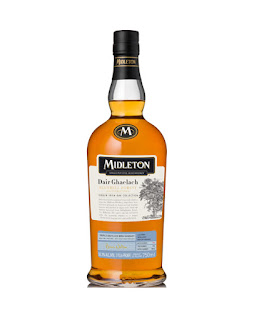 Midleton
The Irish whiskey brand of Midleton has announced the second bottling in their Virgin Irish Oak series - the Midleton Dair Ghaelach 'Bluebell Forest'. Dair Ghaelach translates as 'Irish oak' from Gaelic and was launched in 2015 with the 'Grinsell's Wood' edition. The whiskey is single pot still with ages between 12 and 23 years of age and was produced at the Midleton distillery in Co. Cork. It is a collaboration between Billy Leighton, the Head Blender at Midleton, Kevin O'Gorman, the Head of Maturation for Irish Distillers, and Paddy Purser, an expert forestry consultant.

They chose the Bluebell Forest on the Castle Blunden Estate in Co. Kilkenny to supply the wood for the special maturation casks. Six Irish oak trees were harvested in 2013 from the ancient woodland and from these 29 hogshead casks were created. The whiskeys used were initially matured in ex-bourbon casks before being finished for one and a half years in the Irish oak casks. Dair Ghaelach 'Bluebell Forest' is bottled at 55.3% ABV and is of natural colour and non chill-filtered. It will be available in selected world markets, such as Canada, France, Ireland, the UK and the USA, and will cost €280 per bottle. 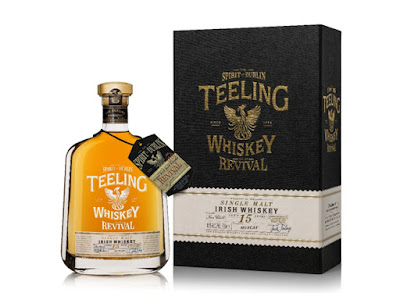 The Teeling Whiskey Co, the independent Irish whiskey producer, have announced the fourth bottling in their limited edition Revival series. The Revival Volume IV is also the penultimate planned release in the series, which was launched to celebrate the opening of Teeling's distillery in central Dublin in 2015.

The whiskey is an Irish single malt that is 15 years old that has been matured in ex-bourbon casks before being transferred to ex-Muscat Port casks for a final year of finishing. There are just 10,000 bottles available in selected global markets (including Belgium, Denmark, Germany, Holland, Italy, Ireland and the UK), which have been bottled at 46% ABV and of natural colour and non chill-filtered. The price will be €120 per bottle.

posted by Whisky For Everyone at 2:54 PM