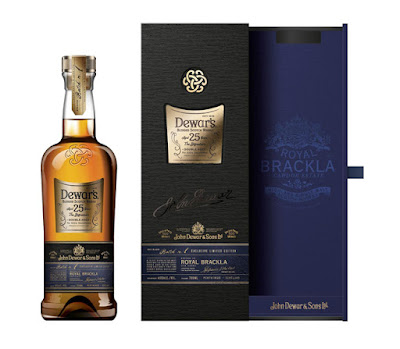 This Dewar's 25 years old whisky replaces the no age statement Signature expression at the top of the popular Dewar's blended Scotch range. The move is designed to show the Dewar's commitment to the age statement category. The new 25 years old expression has been created by Stephanie Macleod, the Master Blender for Dewar's, and uses some of the company's oldest single grain and malt whiskies.

In an additional twist, once blended together the whisky has undergone a further maturation in casks used to mature Royal Brackla single malt. The Royal Brackla distillery is widely regarded as the brand home for Dewar's and its whisky is one of the signature malts in the range of blends.

The Dewar's whisky empire has its roots in the 1840s when John Dewar opened his wine and spirits shop in Perth. However it was not until the 1860s that he pioneered the blending and selling whisky in the local area. Following his death, John's sons (John Alexander and Thomas Robert) formed John Dewar & Sons in 1886. They spread their whisky brand south of the border and through the expanding British Empire.

The company was sold by the family in 1925, by which time Dewar's had grown to be one of the most popular Scotch whisky brands in the world. It has since been operated by various drinks companies and the current owners are Bacardi, who took control in 1998, with Dewar's remaining within the Top 10 best selling blended Scotch whiskies.

The Dewar's 25 years old is bottled at 40% ABV and will cost £170 ($225 US). It will initially be available in the travel retail sector globally, before being put in to key domestic markets later.

Our tasting notes
The colour is golden yellow and the nose has a lovely immediate sweet and malty aroma. This shows as honey, vanilla and robust bittersweet cereals, with a hint of golden syrup and stewed apple. Underneath are further aromas of delicate wood spices and soft dried tropical fruits, especially mango and pineapple.

On the palate this whisky feels slightly thin but has plenty going on. It is full of character and expressive notes. First is a distinct maltiness that has a wonderful warming and slightly bittersweet edge to it. Then comes sweetness and fruitiness - think of honey, vanilla, toffee. milk chocolate and butterscotch mixed with stewed apple, over ripe pears and the dried tropicals from the nose. These seem more prominent now. All of this is backed up by warming wood spices that add depth, complexity and a definitive earthy note - imagine cinnamon, all-spice and clove with hints of soft peat smoke, liquorice and ginger.

The finish is of decent length. The sweeter notes fade and it is the wood spices and delicate peat smoke that survive and continue. This gives a pleasant dryness and mouth watering quality. A late hit of the robust malty cereals complete the experience.

What's the verdict?
The Dewar's 25 years old is a lovely whisky and one that shows how good older blended Scotches can be. There is an intricacy to the blending evident and it has combined a set of competing characteristics and flavours together very well. It is very enjoyable to drink and lingers on the palate well. The only thing that slightly lets it down is the initial thin feeling in the mouth, but this is compensated for with interesting and balanced flavours. A very good whisky and one that is well worth checking out.