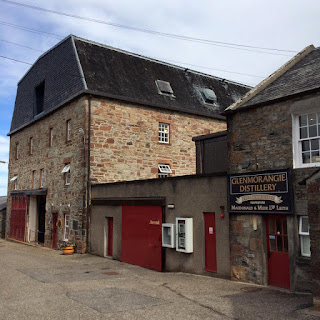 Glenmorangie has a special place in our hearts at Whisky For Everyone. Looking back you could argue that it is the place where it all started for us, the place that sparked our interest in whisky. It was over a decade ago and on a holiday to the north Highlands that we decided to ‘visit something synonymous with Scotland’. That something was the Glenmorangie distillery.

We did the basic tour and remember being fascinated by the place – its location, the whisky making process (although we cannot pretend to have understood it), the architecture and the whisky itself, which we sampled in a small tasting at the end. We left with a bottle of the now retired Cellar 13, which we considered expensive at £40 (oh, those were the days ...) and cracked it open on the sleeper train home to London.

Fast forward 12 years and we were privileged to be part of a very different and exclusive tour, one which showed just how much whisky has passed under our personal bridge. Our guide this time was Dr. Bill Lumsden - the Director of Distilling, Whisky Creation & Whisky Stocks for Glenmorangie. We began with a short walk to the Tarlogie Springs, which are tucked away in a secluded spot over the road from the distillery and normally off limites to visitors.


The Tarlogie Springs supply 70% of the water needed by the distillery and is the hardest water used by any Scottish single malt distillery. This takes an estimated 100 years to bubble up through mineral rich limestone. The remaining 30% comes from another nearby spring named The Kelpies and another secret one, which is only called for in emergencies.

Glenmorangie was founded as a distillery in 1843 on the site of a former brewery and lemonade factory on the edge of the town of Tain. It was established by William Matheson and used barley from the nearby Cadboll Fields. The malting was done on site until 1977 and has been delivered from commercial maltings ever since. The current rate is 13 lorries and 330 tonnes per week. The malt is very lightly peated to a level of 2PPM.


The mill was made by Porteus and has the classic four roller system - the first two rollers crack the husks open and the second pair mill the barley to the required specifications. It takes two hours for 10 tonnes of barley to be milled and the exact specification of the resulting grist changes for different strains on barley. The ultimate aim is to yield 400 litres of new make spirit per tonne.

Each mash uses 10 tonnes of grist and pre-heated water is added at increasing temperatures to extract the sugars from it. Glenmorangie add three different waters (at 63.5°C, then 84°C and finally 96°C) and after seven hours the result is 48,500 litres of sugary wort. This contains the required 85% maltose that is needed.


The fermentation takes place in one of 12 stainless steel washbacks and each holds one 48,500 litre batch of wort, to which liquid yeast is added. Liquid yeast reacts immediately with the wort and allows the fermentation to begin quicker than with powdered yeast. At Glenmorangie they run a 65 hour fermentation and the resulting wash is full of fruity and malty flavours and has a strength of 8% ABV.


This wash is then transferred to what is arguably one of the greatest still houses in the Scotch whisky industry. Glenmorangie is famed for having the tallest stills in Scotland but it is not until you enter the room that you see their full scale. The sight is awe inspiring. Twelve stills - six wash and six spirit - line up to create a cathedral-like effect, which is accentuated by the high ceiling and cavenous space.

The still house is a former warehouse and this was converted to the current set up in 19xx. This was expanded to include the twelve still arrangement in 2009. Each wash still has a capacity of 11,400 litres and the wash run lasts around five hours, resulting in low wines with a strength of 25% ABV. These are then run through the spirit still, which each have a capacity of 8,200 litres, and the final spirit cut lasts around three hours. The tall stills create a light and delicate spirit, which has a strength of 68% ABV.

This is then reduced slightly before being filled to casks for maturation. Glenmorangie is traditionally filled to American oak casks and the distillery proudly claims to be the first to have used them in Scotland. Records show that they starting importing them from post-Prohibition America in 1947. Now the barrels are made to their exact specifications and are seasoned with bourbon or Tennessee whiskey.

The wood for these barrels is sourced from the Ozark mountains in the state of Missouri, which is then sawn to shape and air dried for two years. The Brown-Forman cooperage make the casks and heavily toast the inside surface for three hours, before charring for a quick 30 second blast. Finally, they are filled with American whiskey for four years. This seasons the casks and makes them ready to receive the Glenmorangie new make spirit.


Glenmorangie also used other types of cask to mature or part-mature their whisky such as ex-Port, ex-Sauternes and ex-Sherry. They were one of the early pioneers of the finishing process - the method of moving a maturing liquid fully over to a different cask for a short period so as to influence and enhance the flavours and characteristics of the final whisky. Casks at Glenmorangie are only ever used twice to mature spirit.

There are four traditional dunnage warehouses at the distillery and these house approximately 60,000 casks of maturing whisky. Louis Vuitton Moet Hennessy, the owners of the Glenmorangie distillery and brand, have 34 warehouses and these are located at various sites across Scotland. A total of 550,000 casks are being held in these. That is a lot of whisky.


The final act of our wonderful tour was to have a private tasting with Bill - this included the Glenmorangie Original 10 years old, the Bacalta (this year's addition to The Private Edition range), the new 2017 version of Astar, the 1989 Grand Vintage (apparently we were the first privileged few to have sampled it outside of LVMH employees) and the Pride 1974. What a treat and one enjoyed under the guidance of someone at the top of their industry. A huge thank you to Bill and the team that organised our trip.

posted by Whisky For Everyone at 6:00 PM