Dublin Liberties
The Dublin Liberties distillery have collaborated with The Dead Rabbit bar in New York to release a new Irish whiskey. It is to celebrate the fifth anniversary of the multi award-winning bar. Master Distiller Darryl McNally has teamed up with the bar's founders, Sean Muldoon and Jack McGarry, to create a five year old blend made from a combination of Irish single malt and grain whiskeys.

The initial maturation was in ex-bourbon casks before a period of finishing in small virgin American oak casks. It will be officially launched on 12 February to coincide with The Dead Rabbit's anniversary date. It will be available in limited numbers in New York initially, before rolling out across the USA and selected worldwide markets later. The price will be $40. 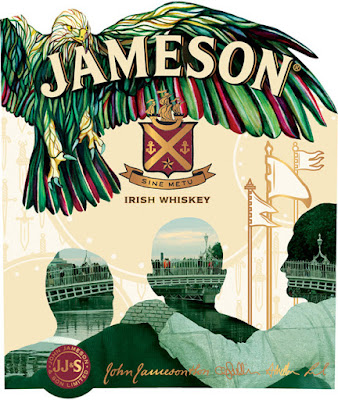 The leading Irish whiskey brand of Jameson have revealed this year's design for their annual St. Patrick's Day label. It is the seventh such label and the first to feature a collaboration between three different artists. Irish illustrator Claudine O'Sullivan led the design process and recruited two friends, British designer Alex Mellon and Irish photographer Leonn Ward. The design is inspired by their friendship and the Fianna, the mythical Irish warriors for their loyalty and bravery.

Claudine's hand drawn eagle represents unity and soars over the silhouette of three friends, which were drawn by Alex. These are against the background of the Ha'Penny Bridge in Dublin, which was photographed by Leonn. The design will be available in 35 countries worldwide including Australia, Ireland and Japan. More information about the design and artists can be found on www.jamesonwhiskey.com.

posted by Whisky For Everyone at 12:36 PM

eToro is the #1 forex trading platform for newbie and professional traders.