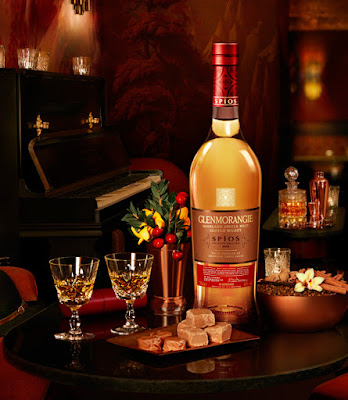 The Spìos is a new limited edition single malt from the famous north Highland distillery of Glenmorangie. It is the ninth expression in their annual Private Edition series, which looks to add a twist to the light and delicate Glenmorangie house style. This year's expression sees Glenmorangie fully matured in American ex-rye whiskey casks. These were sourced by Dr. Bill Lumsden (the brand's Director of Distilling, Whisky Creation & Whisky Stocks) on a trip to the USA in the late 1990s.

Glenmorangie Spìos is named after the Gaelic word for spice and is pronounced spee-oss. It is inspired by the golden age of rye whiskey which spawned such classic cocktails as the Manhattan, Old Fashioned and Sazerac. Rye then fell out of favour, starting with the Prohibition era in America, but is now seeing something of a welcome resurgence.

"I have always loved American rye whiskey’s spicy character, and I believed our smooth house style would perfectly complement the nuances of ex-rye casks. The result is Spìos – a single malt whisky which is unmistakeably Glenmorangie, yet exquisitely different."
Dr. Bill Lumsden.


The Glenmorangie Spìos is bottled at 46% ABV and is non chill-filtered and of natural colour. It will be available shortly through specialist whisky and spirits retailers worldwide and via LVMH's website - www.Clos19.com. Each bottle will cost £79.

Our tasting notes
The colour is golden yellow and the nose is fragrant and fresh with some sweet and floral aromas vying for your attention. There is a lovely mix of honey, vanilla, creme brulee and toffee and these combine with earthy spices - think of gingerbread, clove and white pepper. Hints of peach, malt and something soapy are also evident.

On the palate this feels like a whisky of two halves - initial notes of sweetness and fruitiness are then replaced by influential elements of malted cereals and gripping wood spices. Sweet candy notes (think of candy floss especially) mix with vanilla, custard, green apple and peach. Then comes a big hit of malt and wood spice - think of earthy barley, cinnamon cookies, pepper, cloves and charred oak. Hints of pineapple, morello cherry, prune and red chilli add further depth and complexity. With the addition of water, the whisky is softened. The palate becomes creamier with more sweetness coming through and also interesting strawberry and floral notes.

The finish is expressive, long and becomes increasingly dry and warming especially once the sweetness and begins to fade. Early toffee notes give way to powdered ginger and cinnamon, along with hints of mint and menthol.

What's the verdict?
The Glenmorangie Spìos is an intriguing whisky that is an interesting combination between Scotch and American whiskies. As mentioned earlier, it seems a whisky of two halves as a result. The sweet and fruity notes give way to the expected spice from the rye casks. It feels like it would be a great introduction to the flavours of rye whisky for a beginner.

The Private Edition series always offers an look at some of the innovation going on inside the walls of Glenmorangie. The use of unorthadox casks has created some exciting single malts and these include obscure red wine barrels, plus Marsala and now rye whiskey. What will be next for the 10th anniversary? Dr. Bill Lumsden certainly would not reveal that at the Spìos launch in London, so we will have to wait and see.