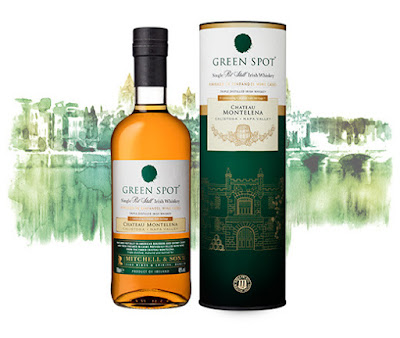 The Green Spot Chateau Montelena is the second bottling in the Irish whiskey brand's Wine Geese series. This sees the classic pot still whiskey matured in ex-bourbon and ex-sherry casks, before being transferred for one year of finishing in French oak ex-Zinfandel red wine casks. These have come from the renowned Californian winemaker of Chateau Montelena in the Napa Valley. It follows the Bordeaux wine influenced Green Spot Château Léoville Barton, which was released in 2015.

The Chateau Montelena vineyard is operated by the Barrett family, who are of Irish descent. The whiskey has been developed by Kevin O'Gorman, the Head of Maturation at the Midleton distillery where Green Spot is made, and Billy Leighton, the Head Blender at Midleton, alongside Bo Barrett, the third generation owner of Chateau Montelena.

"Exploring the influence of these prized wine casks on Green Spot was our inspiration. We found that the black-skinned Zinfandel grapes impart a distinctive and refined fruitiness to the wine and also the casks in which they matured."
Kevin O'Gorman.


Green Spot gets its name from the coloured marks that were traditionally painted on the end of the maturation casks by Mitchell & Son, the Dublin wine and spirit merchants founded in 1805. This denoted the age of the casks - a blue spot for seven years old, green for 10, yellow for 12 and red for 15. Green Spot is made at the Midleton distillery in Co. Cork due to a special historical arrangement with the distillery owners Irish Distillers Pernod Ricard and Mitchell & Son.

The Green Spot Chateau Montelena is bottled at 46% ABV, is non chill-filtered and will be available in selected world markets including Canada, Ireland and the USA. The recommended price is £55 per bottle.

Our tasting notes
The colour is golden yellow with a reddish tint and the nose is initially sweet, before turning spicier. The opening aromas are of golden syrup, vanilla, toffee and white chocolate. Underneath are fruitier aromas of red apple, stewed pear, dried cherries and hints of marshmallow and marzipan. Late bittersweet cereals and a whiff of baking spice give further depth.

On the palate this whiskey follows a similar path to the nose, although the bittersweet cereals and warming spices seem to appear quicker. Initial notes of toffee and caramel are joined by a mixture of milk and white chocolate, mocha and a dribble of honey and golden syrup. Crisp red apple and cooked fruit (pear and a hint of rhubarb) follow. Vanilla begins to creep through, as do the bitter sweet cereals. These have a malty and slightly peppery feel, which are backed up by warming hints of gingerbread and cinnamon. Later hints of clove, coconut, menthol and bitter cocoa powder increase the compexity and add depth.

The finish is long and has an increasing warmth and dryness. This is expecially true once the sweetness, vanilla and fruit notes begin to fade. These drop off dramatically right at the end to leave dry baking spices, clove and pepper to battle out. They do so for some time to give a pleasant and mouth watering feel.

What's the verdict?
The Chateau Montelena expression of Green Spot is an interesting whiskey and one that shows good, yet subtle, use of ex-red wine casks. These can often dominate a whisky, but this has been matured sympathetically. The balance of sweetness, fruitiness and spiciness is enjoyable.

This series takes Green Spot in a different direction and both releases have been very pleasant to date. It will be interesting to see where it goes next. Worth seeking out, if you can find a bottle.

eToro is the best forex trading platform for beginning and pro traders.