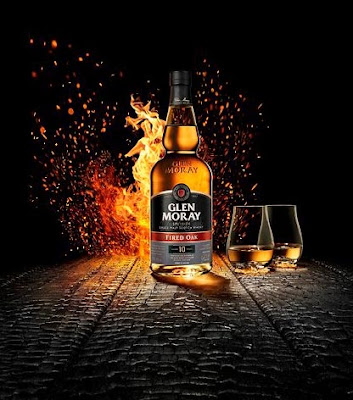 The Glen Moray Fired Oak 10 years old continues a busy year of new and innovative releases from the popular Speyside distillery. The new whisky has been developed by Graham Coull, the Distillery Manager at Glen Moray, and is inspired by his increasing appreciation for American whiskey. Fired Oak has seen classic Glen Moray spirit matured in ex-bourbon casks for nearly a decade before being transferred to heavily charred virgin American oak casks for a 10 month finishing period.

The Glen Moray distillery is located on the outskirts of the city of Elgin, next to the River Lossie. The distillery began life as the West Brewery in 1828 and was later converted to become a whisky distillery in 1897. After a slightly chequered early history it is currently owned by the French drinks company La Martiniquaise, who took control in 2008.

They embarked on a massive expansion programme, which has resulted in an annual production capacity of six million litres, and a major revamp of the single malt range that has seen a remarkable upturn in fortunes for the brand in the following decade.

"The Fired Oak is all about enhancing flavours rather than adding different characteristics. The heavy charred new oak intensifies the existing vanilla and spice flavours which have come from the ex-bourbon barrels. Two elements are key to obtaining just the right flavour infusion - the quality of cask and timing."
Graham Coull.


Described as a 'Gateway To Flavour' by Coull, the Fired Oak is bottled at 40% ABV and is available via selected specialist whisky retailers in the UK. The recommended retail price is £40.

Our tasting notes
The colour is golden yellow and the nose is vibrant and sweet. Initial aromas are of vanilla, crisp green apples and marshmallows. Then come further aromas of white chocolate, golden syrup and candied lemon and lime peel. Underneath are hints of cocoa, cinnamon, malted cereals and cream soda.

On the palate this whisky follows a similar track to the nose. There is an intense sweetness that is reminiscent of white chocolate, fresh vanilla pod and sugar syrup. This then turns slightly fruitier allowing green apple, a hint of dried pear and the candied peel from the nose (especially the lemon) to come through nicely. Later hints of cocoa powder, butterscotch and honey increase the complexity.

The main difference is the spice, which was barely detectable on the nose. Here it hits hard and shows the influence of the charred new oak casks. The effect is warming and grips the tastebuds - think of cinnamon, fresh sawdust, baking spice and gingerbread with a tiny background hint of charcoal and ash. This takes the whisky towards a much drier and hotter finish than originally expected.

What's the verdict?
Another lovely offering from Glen Moray and another giving great value for money. £40 a bottle seems like a steal for this and you get a big, bold whisky for what you pay. The battle between the sweet and spice characteristics is intense, particularly on the palate and finish, but it makes for an enjoyable and expressive ride. Very nice and well worth searching out in our view.