Cù Bòcan is the peated single malt brand from the Highland distillery of Tomatin distillery. The name comes from a local legend in which the Cù Bòcan, a ghostly canine-like creature, appears and causes havoc once every generation before mysteriously disappearing in a puff of blue smoke.

It has been on the market since 2013, but a major relaunch was recently announced. The relaunch involves new bottle designs and packaging, designed by Thirst Craft to 'show the qualities of the contemporary spirit', along with two new core range products. Cù Bòcan is produced using lightly peated Scottish barley for a short period during the winter months each year at Tomatin.

Tomatin is located in the Scottish Highlands, about half way between Aviemore and Inverness. It was founded in 1897 by a group of Inverness businessmen and was called Tomatin Spey. It then became Tomatin, the name of the local village, in 1907. Tomatin is currently owned by the Takara Shuzo Corporation, who purchased the distillery in 1986 after the previous ownership had been liquidated. It has a current annual capacity of five million litres.

The three new bottlings are available in selected specialist retailers with a cost of £45 for the Signature Malt and £60 for each of the two Creations. They will be joined by further expressions in time. 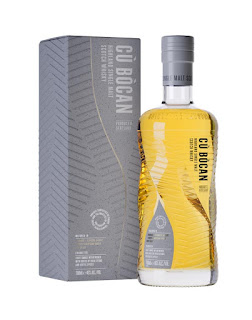 Cù Bòcan Signature Malt
The colour is pale gold and the nose has an interesting mix of sweet and savoury aromas. There are distinct honey and golden syrup characteristics alongside earthy and woody notes. Hints of cream soda, gingerbread and damp charcoal combine with cloves, dried apple and chalk.

On the palate this whisky has an immediate biscuit-like quality that is reminiscent of slightly burnt cookies. Then comes a wave of honey and vanilla with a background note of fresh green apple juice. The peated/smoky quality really comes through as a damp, acrid and earthy feel. Underlying warmth comes from a distinct note of gingerbread and some fresh oak, which grips the taste buds. Final hints of cream soda, sherbet, marshmallow and lemon juice add a bit of depth. The finish is short. Only the earthy smokiness lingers for any time, leaving a warm glow in the mouth. 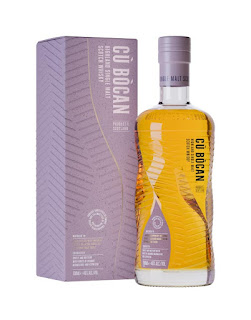 Cù Bòcan Creation #1
The colour is deep golden yellow and the nose has an immediate richness to it. Initial aromas of caramel and milk chocolate evolve in to dried fruits (especially sultanas with a hint of candied orange peel) and cappucino. The peat influence is there and has an earthy feel, rather than a smoky one. Hints of dried green apple and ginger cookies add complexity.

On the palate this richness from the nose continues. Juicy sultanas mix with notes of milky coffee and damp earth. The combination is slightly odd but very pleasant. The earthiness becomes more dominant with time and develops a savoury and slightly spicy edge, which is most reminiscent of dried cigar tobacco leaf. Further notes of candied lemons, dried apple and a selection of dusty woody spices (think of cinnamon, powdered ginger, dried oak chips and a pinch of white pepper), plus hints of meringue and cocoa powder round things off. The finish is of decent length. The sweetness holds to elongate this, before fading to let the earthy peat notes and dusty spices take hold. 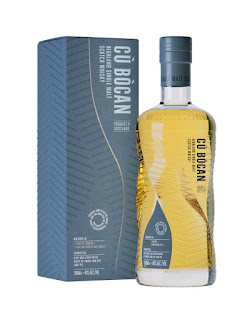 Cù Bòcan Creation #2
The colour is a pale lemon yellow and the nose is light, delicate and fresh. Vibrant green apple and earthy peat aromas combine with vanilla extract, baking spices, oak and lemon zest. Underneath are hints of white chocolate and marshmallow, along with a tiny suggestion of hazelnut praline.

On the palate this whisky has an immediate lemon-like juiciness to it and this mixes with notes of vanilla custard, white chocolate and crisp green apples. Then come further notes of poached pears, lemon and lime zest, cinnamon stick and something reminiscent of white wine. The delicate and earthy peat smoke is never far away and drifts around the other characteristics. There are also background notes of malted cereals, cocoa powder and hints of hazelnut and almond. The vibrancy from the nose is maintained throughout. The finish is short but leaves the mouth feeling refreshed and clean. Very nice.


What's the verdict?
These three new whiskies in the Cù Bòcan range are interesting and push the delicate and lightly peated spirit in three different directions. The Signature Malt is the most traditional but with a clear heavy influence of virgin oak. The Creation #1 is the boldest and richest of the three, while the Creation #2 is the most delicate and freshest.

All the liquids are clearly quite young but the way they have taken on the characteristics from each cask type is encouraging. It will be intriguing to see what further Creations come out to join the range and the different flavour profiles that they will have. More and more brands are now experimenting with unorthadox casks since the Scotch Whisky Association relaxed its laws recently. Some will work and some will not. These Cù Bòcans show potential.