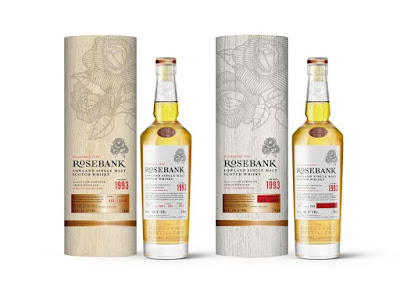 These two highly exclusive whiskies are from the Lowland distillery of Rosebank, which is currently being reborn under Ian Macleod Distillers. The two very special single casks were both distilled in 1993, the year that Rosebank was last in production. Both casks are re-fill ex-bourbon hogsheads. The Rosebank 1993 Cask #433 has yielded just 280 bottles and is released at its natural strength of 53.3% ABV. Cask #625 has yielded only 259 bottles and is released at 50.4% ABV.

Ian Macleod Distillers began redevelopment of the Rosebank distillery, which is located in Camelon, near Falkirk, in 2018. The distillery, which sits on the banks of the Forth & Clyde Canal and closed in 1993, will see the original canalside building and recognisable chimney stack redesigned to incorporate a modern and energy efficient production facility.


The projected annual capacity will be around one million litres and the estimated date for production to begin and the visitor centre to open is Autumn 2020. Rosebank was formally known as 'King of the Lowlands' and was previously owned by Diageo. It is expected to bring 50,000 visitors a year to the local area.

"With the distillery’s redevelopment well underway, it is an exciting chapter for Ian Macleod Distillers and Rosebank. We are incredibly excited and proud to be releasing our first official bottlings since the distillery’s closure in 1993."
Robbie Hughes - Distillery Manager at Rosebank.


The Rosebank 1993 Casks #433 and #625 were only available via a ballot. Each bottle is priced at £2,500 with only 100 bottles from each cask being made available initially. This ballot is now closed but further information about each bottle can be found by visiting the dedicated webpage www.rosebank.com/ballot. 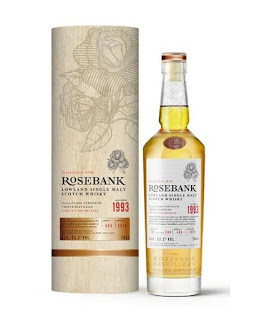 Cask #433
The colour is pale golden yellow and the nose is full of aromas of dried grass, heather honey, vanilla and zesty lemon peel. Then come further aromas of barley sugar, peanut brittle and whiffs of milk chocolate and ripe tropical fruits (especially mango and peach).

On the palate this whisky allows the barley sugars to come through first and this vibrant characteristic is backed up by the deliciously juicy (almost over ripe) tropical fruits - think of mango and peach again with a hint of pineapple. Then come vanilla and honey-like notes, which increase with time, and zesty peppery candied lemons. Hints of cocoa powder, toasted oak and nuts, tangy green apple and a pinch of cinnamon round things off. The finish is drier than expected as the fruity and sweet notes fade to leave bittersweet cereals, dried grass and warming baking spices with a tiny hint of gingerbread. 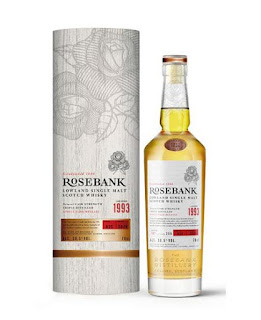 Cask #625
The colour is golden yellow and the nose has an interesting initial floral aroma - think of heather and citrus blossom in particular. Then comes sweet toffee (or is it fudge?), moscovado sugar and vanilla along with hints of fresh lime juice and sultana.

On the palate this whisky has an immediate oily and gripping texture. Wood spice and bittersweet cereals rise first with toasted oak and robust barley up front. Then come further notes of citrus - imagine lime juice and orange marmalade especially - and something sweet like fudge or toffee. There is also something astrigent in the background that is difficult to pinpoint - this is most reminiscent of goosberry or rhubarb. Hints of dried grass, menthol, liquorice and cinnamon add depth and complexity. The finish is drying and grips the taste buds, especially once the sweetness fades to enhance the spicy, oaky and slightly astringent fruit elements.


What's the verdict?
With Rosebanks currently so rare, either from previous owners or independent bottlers, then this feels like a special pair of whiskies. They are of course expensive at £2,500 per bottle but that was always going to be the case in reality. You are paying for liquid history after all and Rosebank's classic old Lowland style in particular.

Both of these whiskies are very bright considering their age and easy drinking considering their ABV strengths. However, both go in different directions. This is interesting, especially when considering that they are both of the same age and both matured in the same type of cask. Karen preferred the citrus, spice and astringency of Cask #625 and Matt preferred Cask #433 with its dried grass and creamy honey and vanilla notes.

It will naturally be interesting to see what the spirit from the new project is like. We understand that this is going to be based on that of Rosebank from the 1980s and early 90s, which is described as the definitive Lowland style. We have some time to wait for that and we will continue to follow progress, and any subsequent such releases as this, with interest.

posted by Whisky For Everyone at 5:03 PM