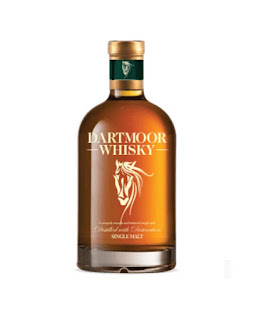 The Dartmoor Distillery has released its second batch of single cask single malts. The three whiskies follow an earlier inaugural release in February from some of the very first casks filled and matured by the distillery, including Cask #1. In this second batch there are three single casks that have been selected - an ex-bourbon cask, an ex-red wine cask from Bordeaux and an ex-Oloroso sherry cask. Again, these are some of the first casks to be filled after production began in February 2017. All three are bottled at 46% ABV with the Ex-Bourbon and Ex-Bordeaux costing £59.50 each. The Ex-Oloroso costs £89.50. They are available from the distillery shop or via the Dartmoor Whisky website.

The Dartmoor Distillery is located in the small Devon town of Bovey Tracey on the edge of the Dartmoor National Park. It was founded by Greg Millar and Simon Crow in 2016. They purchased the Old Town Hall building and kitted it out with a refurbished still that had previously distilled Cognac in France. The spirit is made using local barley, which is then malted at a nearby floor malting, and Dartmoor spring water. They have employed Scotch whisky distilling legend Frank McHardy as Master Distiller.

Dartmoor Ex-Bourbon Cask
The colour is a pale lemon yellow and the nose has a distinct aroma of green apple with malty and earthy cereals. Then come further aromas of cookie dough with baking spices, plus some honey and vanilla.
On the palate this whisky has an initial intense sweetness - think of honey, icing sugar and something like marshamallow or cream soda. There are also notes of crisp green apple and baked oat cookies, plus a hint of golden syrup. Further hints of baking spice (especially cinnamon and all-spice), white pepper, cocoa powder and a twist of lemon zest add depth. The finish is relatively short. The sweetness fades to leave the baking spices and peppery heat.
Dartmoor Ex-Bordeaux Wine Cask
The colour is golden yellow with a hint of amber and the nose has initial aromas of green apples and earthy, dusty malted cereals. Then come further aromas of dried fruits (think of sultana, cranberry and cherry in particular), manuka honey and milk chocolate.
On the palate this whisky has a nice initial sweetness with plenty of chocolate and dried fruit notes present. This is a combination of milk chocolate and cocoa powder with raisins, sultana, cherry and candied orange. There is also a note of dried green apple and dessicated coconut. Underneath is the robust earthy malted cereal characteristic from the nose and some warming wood spices - think of toasted oak, cinnamon and a crack of black pepper. The finish is of decent length, but a little drying and hot.
Dartmoor Ex-Oloroso Sherry Cask
The colour is golden yellow and the nose is rich and sweet with lovely initial aromas of brown sugar, toffee and sultana. Further aromas of golden syrup, candied orange and green apple develop. These are joined by a cinnamon-like warmth and a hint of putty.
On the palate this whisky has an immediate richness and sweetness again. Notes of golden syrup and brown sugar lead the way before being joined by juicy dried fruits - think of raisins, sultana and candied orange peel. Then come further hints of vanilla, coconut and pinches of cocoa and cinnamon. Underneath are suggestions of toasted nuts, hazelnut praline and ginger cake. The sweetness begins to fade as the finish progresses and this leaves the whisky a little hot as the youthful spirit reveals itself.
What's the verdict?
We love sampling whiskies from new distilleries for the first time. The three from Dartmoor are all clearly young and this shows through the aromas and flavours present. However, it is very interesting how the three different cask types have taken the same spirit in three different flavour directions. The spirit seems fresh with green apple, robust and malty. It has plenty of potential.
So what was our favourite of the three? Undoubtedly it was the ex-Oloroso sherry cask, which has more depth, complexity, sweetness and richness than the other two. This is followed by the ex-red wine in second place, which has plenty of fruit, spice and late dryness. The ex-bourbon cask, usually a good pointer for a new craft spirit, was a little simple and hot. It is the one that clearly needs longer to develop in the barrel. A promising start.
posted by Matt C at 4:57 PM

I’ve never read such a load of cod’s wallop , I’ve sampled many a dram & to me there’s just two types, smooth.. & course, either way drink enough & your head will spin.😵‍💫

Both of the above comments are very sad unless the “you are clueless” remark refers to the first comment.

I purchased a bottle of the ex Oloroso cask about six months ago, opened it and although enjoyed it was surprised by the overwhelming banana note in the dram. Nice but not blown away. Coming back to the bottle tonight, I really do get the quality of the casks they have procured. It’s just lovely. Soft, sweet, raisins and dates on the nose with a really well integrated taste on the palate.
I will definitely be going back for another one of these even though at the time it seemed pricey for the age of the dram. It’s not about age but quality and this has it in abundance.

If your going to comment on this blog be sensible and contribute something worthwhile unlike the anonymous first commentator.

Garrison Brothers Whiskey is for those who love to enjoy each ship of their drink. When it’s a gathering of old friends or a joyous occasion that you would love to cherish with a close one, a bottle of bourbon whiskey adds charm to the occasion.