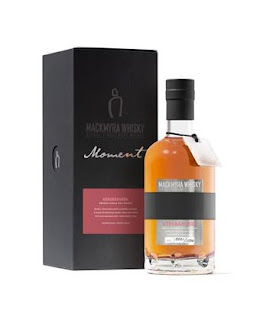 This whisky is the latest in the limited edition Moments range from the Swedish distillery of Mackmyra. The Mackmyra Körsbärsrök, which translates as 'cherry smoke' from Swedish, has been created by Angela D'Orazio - Master Blender at Mackmyra. She used a combination of smoked and classic unsmoked spirits that were distilled in 2010. The smoky spirit is only produced for about one month every year and the malt is smoked using Swedish peat and juniper twigs. The whiskies were matured at Bodås, Mackmyra's warehouse in an old iron ore mine, in two sizes of ex-bourbon cask (100 and 200 litres) and two sizes of ex-cherry wine casks from Germany (100 and 128 litres).

Mackmyra was founded in 1999 by eight friends who decided to build Sweden's first single malt distillery whilst on a skiing trip. The original distillery was replaced in 2012 by a larger new eco-friendly distillery in the town of Gävle. This state-of-the-art distillery is 37 metres high, cost an estimated £50 million to build and uses gravity during production - simplistically, malted barley is fed in the top and new make spirit comes out of the bottom. The annual production capacity is approximately 525,000 litres.

Mackmyra Körsbärsrök is bottled at 43% ABV and will be available via selected specialist retailers in key European markets including Germany, Sweden and the UK. It can also be purchased via Mackmyra's German or UK websites. There are just 1,500 bottles and each will cost £99/ €121.90.

The colour is deep gold and the nose is immediately highly fragrant. Aromas of fresh red fruit - think of redcurrant and cranberry especially - and dark plums lead the way and are supported by hints of walnut and delicate vanilla. Soft sweet smoke adds savoury quality and entwines around everything. Late rose petal and a pinch of cocoa add to the fresh and aromatic feel.

On the palate this whisky maintains the freshness and fruitiness from the nose. These are the elements that rise first, especially the red fruit. The red currant and cranberry are present again and in abundance, but are joined by chocolate coated cherries and a hint of spiced plum. Underneath are notes of vanilla, fudge and a representation of malted barley. The soft smoke feels less sweet now and drifts around the other characteristics to give a lovely warmth and depth. Towards the end it seems to become drier in nature, almost ashy. Late hints of Turkish delight and cherry wood, plus a heavy pinch of cocoa powder and warming baking spices - imagine cinnamon, all-spice and hints of clove and white pepper.

The finish is of decent length and quickly becomes very drying. The spices and smoke lead the way, especially once the juicy fresh fruit notes fade. this leads the whisky to turn slightly ashy and charcoal-like with a tannic and woody edge.

This is a delicious latest addition to the Moments range by Mackmyra. We like the controlled experimentation that the distillery follows and their use of unorthadox cask types for maturing the whisky. We also like the smoke here - it is very unlike that traditional acrid and medicinal Islay smoke and at a good level. The combination in Körsbärsrök of sweet, soft smoke and the fruit wine cask maturation is sublime and works superbly. Well worth grabbing a bottle before it has gone.