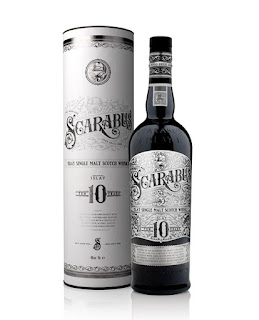 This whisky is a new addition Islay single malt brand of Scarabus, which is bottled by family-owned independent bottlers and distillers Hunter Laing & Co. It is one of two new additions that will sit permanently in its newly created core range. This Scarabus 10 years old, plus the Scarabus Batch Strength, will join the re-named Scarabus Specially Selected that was launched last year. Scarabus translates as 'rocky place' in Nordic and refers to the rugged location on the north eastern coast of Islay where Hunter Laing have built their Ardnahoe distillery. The Scarabus 10 years old has been matured for a minimum of a decade in re-fill ex-bourbon and virgin American oak casks.
The Scarabus 10 years old is bottled at 46% ABV and is non chill-filtered and of natural colour. There is no distillery on Islay named Scarabus, so the origin remains a trade secret. It will cost £45/ $60US a bottle and will be available in selected specialist retailers worldwide and via www.ardnahoedistilleryshop.com.

"Following the success of the Scarabus launch at Feis Ile last year, it is very exciting to add these two brand-new expressions to create a core range. Scarabus is a brand which we are incredibly proud of, and to see it grow and develop is wonderful."
Stewart Laing - Managing Director at Hunter Laing & Co.

Our tasting notes
The colour is pale lemon yellow and the nose is full of burnt biscuit-like aromas - think of malted cereals, oat cookies with damp earth and moss, plus ashy charcoal and bonfire embers. Underneath are further aromas of honey and vanilla, along with some crisp green apple and pinches of both cinnamon and white pepper.
On the palate it is that malty and biscuit-like quality that hits first again. This has a distinct oatmeal quality with a hint of ginger biscuit also. There is a little heat that also builds pleasantly and this is most reminiscent of white pepper and red chilli. The peaty smokiness is never far away and seems more pronounced and influential than suggested on the nose - this again has that ashy charcoal feel with some damp moss and a expressive earthiness.
Some much needed sweetness appears to add balance. Without this the whisky would be too savoury and lopsided - think of honey, vanilla, icing sugar and butterscotch in particular with a touch of golden syrup and milk chocolate in the background. Finally some warming spices add further depth, especially cinnamon and some more ginger.
The finish is long and warming. The maltiness and smoke are the two longest lasting characteristics, especially once the sweeter elements have faded. The warming spices are next to go to leave that peaty and biscuity quality to linger away.
What's the verdict?
The original Scarabus made it in to our Top 10 Whiskies list last year and we loved it, so this new 10 years old expression had a lot to live up to. And it more than does that by building on its 'no age statement' predecessor in both aroma, flavour and complexity. The Scarabus 10 years old offers plenty including multiple layers of characteristics and decent value for money. Anyone who likes the peaty smoky style of whisky should grab a bottle of this Islay single malt. Or ask for it for Christmas, maybe?
posted by Matt C at 5:30 PM

you tried the batch strength?