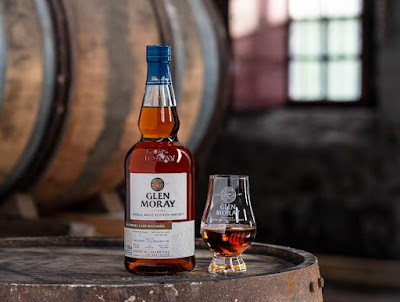 This whisky is a new limited edition single malt from the Speyside distillery of Glen Moray. The Glen Moray Sauternes Cask Matured launches their new Warehouse 1 Collection, which will showcase some of the innovation going on in the distillery's most well-known warehouse. This single malt is constructed of just five casks that had previously held sweet Sauternes dessert wine, which were sourced from France, before being filled with Glen Moray new make spirit in August 2006.

The Glen Moray distillery is located on the outskirts of the city of Elgin, next to the River Lossie. The buildings began life as the West Brewery in 1828 and were converted to become a whisky distillery in 1897. It is currently owned by La Martiniquaise, who took control in 2008. They have overseen a massive expansion programme, both in terms of increasing the annual production capacity to six million litres and a major revamp of the single malt range. This has resulted in a remarkable upturn in fortunes and significant growth for the brand over the last decade.

"This first whisky in our new Warehouse 1 Collection shows a perfect marriage of Glen Moray’s spirit with all the rich, deliciously sweet flavours you would enjoy in a glass of Sauternes. It is a real celebration of Glen Moray’s passion for unusual cask maturation."
Dr. Kirstie McCallum - Head of Whisky Creation at Glen Moray.

The Glen Moray Sauternes Cask Matured has been stored in Warehouse 1 at the distillery and is bottled at 14 years of age. It is released at the natural cask strength of 59.6% ABV and is non chill-filtered and of natural colour. The whisky is exclusive to the UK market and is available now via selected specialist whisky retailers. A bottle will cost £79.95. The exact number of bottles has not been revealed.
Our tasting notes
The colour is deep gold and the nose is immediately a battle of sweet versus spice. Aromas of honey, golden syrup and milk chocolate go up against aromas of toasted oak, cinnamon and dusty malted cereals. Further aromas of dried fruit (especially sultanas and candied grapefruit peel), vanilla and hints of espresso coffee and gingerbread are also detected.
On the palate this whisky feels oily and syrupy with a mouthcoating quality. It grips the taste buds and it is the sweet characteristics that come through first. The combination of dried fruits (sultanas again, plus some raisin and apricot) and honey, golden syrup and chocolate is wonderful, and just adds to the oily and viscous mouth feel. Distinct notes of baked apple and dusty malted cereals then develop to give further depth. These are backed up by hints of cocoa powder, dried grapefruit peel and Christmas spices - think of cinnamon, all-spice, nutmeg and clove. A late nutty quality also comes through and is most reminiscent of bitter almond and walnut. A final pinch of white pepper and a hint of malt biscuits round things off.
The high ABV means the whisky lends itself to a drop or two of water. With water it becomes creamier and softer with the vanilla, honey and baked apple notes coming through particularly well. The spices are dampened with a hint of burnt caramel also developing. The finish is also shortened, but seems juicier.
What's the verdict?
The Sauternes Cask Matured is a fine start to the new Warehouse 1 Collection. Casks such as ex-Sauternes are often used for finishing periods of six months to two years, so to get a whisky that has had full maturation for 14 years is both exciting and risky. However, it works and is released at a decent price for a limited edition from a rare and unortadox cask type.
It is going to be very interesting to see what the next expressions in the Warehouse 1 Collection will be. A couple of addtions are planned for next year. We have been in to the aforementioned warehouse and seen some of the rare and untraditional casks that are maturing there. There are some tasty treats to come we think ...
posted by Whisky For Everyone at 5:14 PM