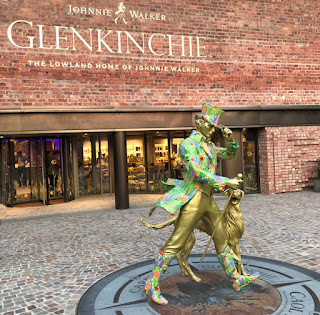 Despite having been to Edinburgh for work and pleasure on numerous occasions, we had somehow never got around to visiting Glenkinchie. For much of its recent history this unassuming distillery was the closest to Scotland's capital and attracted many visitors because of the fact. Now it has increasing competition with the Holyrood distillery built right in the centre of Edinburgh and a couple more new ones out in Leith. So what have owners Diageo done? Given it a major revamp and made it even more important than ever.

Glenkinchie is now the official Lowland home of Johnnie Walker, the world's best selling Scotch whisky of which its single malt is an important component. The distillery is one of four dotted around Scotland that each play a similarly influential role within the famous blended range. The other three official regional homes of Johnnie Walker that form Diageo's Four Corners of Scotland are Caol Ila on Islay, Cardhu in Speyside and Clynelish in the Highlands. Each has been renovated to tell each distillery's individual story within the wider Johnnie Walker tale.

The initial impression of the redesigning at Glenkinchie is favourable. A winding path weaves through an impressive newly created garden with the original distillery burn running through it. Entry is through a revolving glass door that brings you into the ticketing area and a large open gift shop that is stacked with Glenkinchie and Johnnie Walker goodies, plus other treats from around Diageo's other single malt distilleries. The brick building was a former two-storey maturation warehouse.

Our tour guide was Ramsey Borthwick, a man that we had last met nearly eight years previously when he was manager at the Port Ellen Maltings on Islay. He moved to Glenkinchie six years ago and has been Distillery Manager ever since. A sharp ring of the distillery's former 'dramming bell' got everyones attention and signalled the beginning of the tour.

A bit of history kicked things off - Glenkinchie was founded in 1825 by George and John Rate as a farm distillery named Milton, gaining a full license to distil and changing to its current name in 1837. We also learned that Glenkinchie is known as 'the garden distillery' in reference to its location within the fertile East Lothian farmland. And that the first official link between Glenkinchie and Johnnie Walker was in 1894.

Next stop is The Sensory Room, the like of which we cannot remember seeing as part of a regular distillery tour. This extraordinary room has ambient music playing, is creatively lit and designed to show you the 'thumbprint of Glenkinchie'. This is done through a series of perfumed fragrances sprayed onto sticks that encourage you to think about key characteristics of Glenkinchie's single malt. Floral, grassy and cereals are the three we identified.

We continued through to an equally impressive but much older room. This housed the most incredible model of a distillery, which is at 1:6 scale. The stunning model was built for the British Empire Exhibition, which took place at Wembley between April and October 1924. Incredibly it is fully operational. Also within this room is an original pamphlet about Glenkinchie written by legendary whisky writer Alfred Barnard. This priceless artifact is one of the only known copies in existence and was given by an anonymous donor.
Then we moved on to the distillery proper. No more marketing or experiential interactions, just good honest production. This began with the old mill made by the Porteus company, who famously went bankrupt because their mills never broke down and no one purchased a replacement. These red workhorses are still seen at distilleries all over Scotland. The mill feeds a 10 tonne stainless steel mash tun, which sits in a compact room. They currently operate 10 mashes per week.
Next is the fermentation room which is up some stairs away from the mash tun. This is a lovely room and always one of our favourite places within any distillery. The six wooden washbacks made of Oregon pine, the oldest of which is an amazing 65 years old. The youngest was installed in 2020. The fermentation times vary but averages at around 75 hours. One for the whisky geeks - Glenkinchie is a hard water site and therefore experiences a significant build up of iron oxilate in the washbacks.
The stills at Glenkinchie,which date back to the 1960s, are massive. The wash still has the largest charge by volume of any still in mainland Scotland (only Bunnahabhain on Islay beats it, if you want to know). This 30,000 litre monster carries out the first distillation and works alongside a smaller spirit still, which completes the second distillation. That said, it is still massive with a 21,000 litre capacity. Glenkinchie's output is around 2.5 million litres of spirit per year.
Glenkinchie is one of the few distilleries in Scotland to still use wormtubs for condensing. This traditional method of condensing the alcohol vapours back to a liquid sees a coiled copper pipe coming from the still and spiralling down through a tank of cold water. Sadly we were unable to see this, which was a shame as it always feels like a treat and looking back into the past.

The final part of the tour takes in a small warehouse experience and a tasting. It is here where the Johnnie Walker link is reconnected for the first time since The Sensory Room. Different casks are available the sniff and show how the single malts and single grain whiskies within Johnnie Walker's blends are influenced by them. The Tasting Room is a very nice space. Sleekly designed and with a huge flavour wheel on the wall, it feels like a good place for a tasting. The samples on offer were the classic Glenkinchie 12 years old, the limited Tattoo Edition and Johnnie Walker Gold Label.

Then we were back in the shop and the tour was over. It was an impressive blend of the new and the traditional. The innovation and most of the Johnnie Walker Four Corners redesign seemed to bookend the experience. The production side remains largely untouched aside from the occaional wall graphic here and there. This was good to see as much of the tradition could easily have been lost. Glenkinchie is a working distillery after all and that came across very well. Ultimately, the integration of the Johnnie Walker message has been sympathetically done and makes the distillery well worth that short drive from Edinburgh.
Tours
Prices start from £13 with some including a shuttle bus from the centre of Edinburgh. For full details of tickets available and timings - click here.

posted by Whisky For Everyone at 4:33 PM