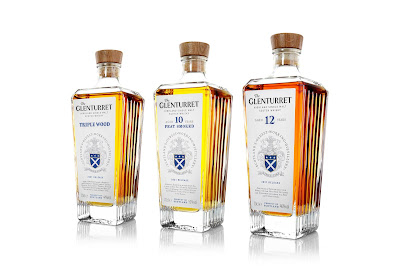 These three new whiskies form part of the 2021 range of single malts from the Highland distillery of Glenturret, which is the oldest currently operating in Scotland. The range follows 2020's Maiden Release series and features the same six expressions - the no age statement Triple Wood, 10 years old Peat Smoked and then age statements at 12, 15, 25 and 30 years old. However, each whisky is different to its 2020 version. They have been created by Bob Dalgarno, the Whisky Maker for Glenturret.

Glenturret is located in the Perthshire town of Crieff and was founded by a group of illicit whisky producers in 1775. It was originally a small farm operation called Hosh Distillery and this was finally legalised in 1837 when John Drummond took over. The name was only changed to Glenturret in 1875 on the 100th anniversary of production. Glenturret is one of the smaller distilleries in Scotland with an annual production capacity of only 150,000 litres. It is also one of the most traditional with most work still completed by hand. The current owners are Lalique, the famous luxury jewellry and crystal producer, who took over in 2018.

In addition to these three we are reviewing, the 15 years old has been matured in re-fill casks and is bottled at 53% ABV. There are just 204 bottles of the 25 years old and 750 bottles of the 30 years old. They are bottled at 44.3% and 41.6% ABV respectively. All six bottlings are of natural colour and all are non chill-filtered with the exception of the Triple Wood.
Our tasting notes 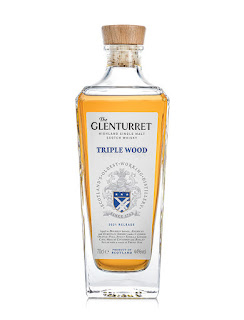 Glenturret Triple Wood
The colour is golden yellow and the nose is full of caramel, toffee and dried fruit aromas. Raisins, sultanas and burnt orange rise from the glass and mingle with vanilla and a hefty dose of chared oak spice. The nose becomes more woody and cereal-like with time.
On the palate this whisky has a softer nature than the nose suggests. Creamy vanilla, honey and golden syrup notes kick things off and these are joint by further notes of toffee and burnt caramel. The dried fruits take time to come through (think of raisin and prune especially) and are joined by bitter orange and some toasted nutty notes. Then come the cereals and distinct oaky characteristics. These take the whisky in a more robust direction - imagine notes of malted biscuit, oatcake, freshly charred wood and peppery spices. It becomes drier, warmer and a touch bitter with time and loses all sweetness towards the end. Pinches of white pepper and cinnamon round things off. 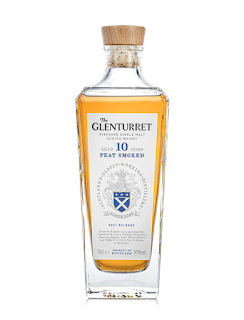 Glenturret 10 years old Peat Smoked
The colour is golden yellow and the nose has an acrid and medicinal feel. Aromas of surgical bandage, bonfire ash and damp moss come through initially with earthy Autumn leaves following. Dusty cereals, honey, vanilla and some lemon zest are also evident, along with a hint of white chocolate and clove.
On the palate this whisky packs a savoury punch. This follows two tracks - one damp and leafy, and the other ashy and acrid. Wet leaves, moss and soil notes mingle with burning embers, bitter herbs and coal tar soap. Earthy cereals are also present and add to the bittersweet feel of the whisky. Finally some much needed sweetness develops with lovely notes of honey, vanilla fudge and white chocolate coming through. Something reminiscent of cake mix or cookie dough is also present. Late warming spices evolve to add further depth and complexity - think of clove, all-spice, dried green chilli and a good grind of black pepper. 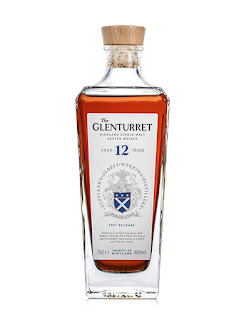 Glenturret 12 years old
The colour is deep coppery amber and the nose is rich and sweet. Caramel and toffee aromas hit the nostrils and are quickly followed by plenty of dried fruits - think of raisin, sultana, prune and candied orange with a hint of date. There is also a woody nut-like quality that comes through and a pinch of baking spice.
On the palate this whisky is rich, but less sweet than on the nose. There are notes of caramel and toffee again but these seem more subdued. They are joined by hints of golden syrup and treacle. The dried fruits, especially the raisins, are also there along with a suggestion of crumbly brown sugar. A distinct malted biscuit note evolves and adds structure to the whisky, and then everything turns more savoury. Toasted nuts and varnished wood characteristics begin to develop and turn a touch earthy and tobacco-like towards the finish. A hefty pinch of charred oak and baking spices (especially cinnamon and mace with a hint of clove) are also present.
What's the verdict?
We have not sampled too much from Glenturret, so were looking forward to these and discovering the new range.  The small batch and annual release approach by the new ownership is an interesting one and seems to suit the size and ethos of the distillery.
Each of the three whiskies that we sampled had a distinct cereal note that seems to run through the range. Each is also heavily influenced by their respective cask maturation and this take them in three different directions. After tasting them we are still not sure what Glenturret single malt is all about. Interesting to taste but ultimately a little confused as a range.
posted by Matt C at 6:41 PM