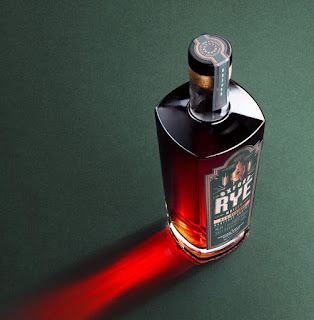 This new whisky is the fifth release of rye spirit produced at The Oxford Artisan Distilley (or TOAD for short) - the English distillery that has celebrated its fourth anniversary this year. The spirit was made using heritage varieties of grain that were harvested in Autumn 2017 from fields just seven miles from the distillery. The composition of the mash was 90% maslin (a blend of 70% rye and 20% wheat that were grown in the same field) and 10% malted barley.

The whisky has undergone a journey through three different cask types. It began in two American oak ex-bourbon barrels, which were then combined into one ex-Pedro Ximenez sherry butt. This was then finally split between two vintage Port barriques for its final maturation. The Red Red Rye follows the first four batches that have been released over the last year or so.

The Oxford Artisan Distillery was founded in 2017 by Tom Nicolson and sits on the outskirts of the city of Oxford. The first production took place on July 27 of that year and has its bespoke stills, designed in conjunction with South Devon Railway Engineering, housed in an old barn. The distillery has to date produced single malt and rye whiskies, plus various gins and vodka, and only uses heritage varieties of grain grown organically. They are advised by archaeobotanist John Letts. He has spent 25 years researching and growing ancient cereals that were commonly farmed in the UK before industrial farming was introduced.

The TOAD Red Red Rye is released at 46.4% ABV and is both non chill-filtered and of natural colour. There are just 600 available and these can be purchased via the distillery website here. A few bottles will also be available through selected specialist UK retailers. Each bottle will cost £150.

The colour is a deep red amber and the nose is packed with rich and sweet aromas. Fragrant cereals and caramel mingle with milk chocolate and toffee apple to create a heady mix. Later aromas of floral honey, red fruit compote and dark dried fruits (think of raisin and fig especially) come through along with a pinch of baking spice and a hint of menthol.

On the palate this whisky has plenty of power and grip. It seems to hold onto the tastebuds and keeps developing. The mix of sweet versus spicy creates a similar heady feel as on the nose. Bittersweet cereal notes give an earthy quality and combine with dry, warming and tannic wood spices. The caramel and fairground toffee apple from the nose are also present to give much needed sweetness.

Dark dried fruits (imagine raisin and fig again, plus date) and red fruit jam or compote add further depth and richness (think of cranberry and hedgerow brambles). There are also evolving notes of milk chocolate and mocha, along with a hint of black treacle and cardomom. The warming and drying spices return to round things off  in the form of cinnamon, toasted oak and cassia bark.

The finish is long and increasingly warming. The sweet and fruity notes fade to leave the spices and bittersweet cereals to build further. This is the only time where the whisky shows its youthful age through a lasting heat once all other notes have gone.

The Red Red Rye is simply delicious and perfectly shows some of the wonderful experimentts that are happening through the craft whisky scene in the UK at the moment. We love the distillery's attention to detail and the fact that they use ancient and heritage cereal varieties that could otherwise have been lost to history. The results are increasingly impressive and long may it continue. It will be so interesting to see what else comes from TOAD in the future.

I want to get behind them as they are local but why so very expensive?