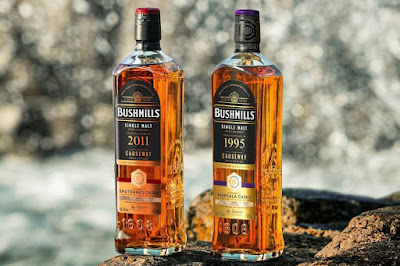 The Causeway Collection is an annual series of whiskeys from the Irish single malt distillery of Bushmills. This years selection, which is named after the Giant's Causeway that is located close to the distillery, features 12 whiskeys. The youngest is bottled at nine years of age (the 2011 Sauternes Cask Finish pictured, above left) and the oldest at 32 years old (the Port Cask, one of the oldest ever releases from Bushmills).

Other highlights include two Marsala Cask Finishes from 1991 and 1995, another Port Cask Finish from 2000 and a Jupille Cask Finish from 2008 featuring a barrel from the famous Belgian brewery. The 12 whiskeys will be spread across eight world markets - Australia, Canada, France, Germany, Ireland, Scandanavia, UK and travel retail. All are triple distilled, non chill-filtered and natural cask strength with prices ranging from €55/ £47 to €950/ £815 per bottle.

Bushmills holds the oldest distilling license in the world dating back to 1608. However, the official foundation date is widely recognised as 1784. It is located in the town of Bushmills. This sits right on the northern County Antrim coast in Northern Ireland and just two miles from the famous Giant’s Causeway. Another claim to fame is that Bushmills has the longest continually used logo - the pot still design was introduced to celebrate the formal registration of the distillery in 1784 and still used today. The distillery is owned by Casa Cuervo, who took control in 2014, and the annual capacity is nine million litres.

"The Causeway Collection celebrates our extremely rare and unique cask finishes, our passion for single malt and honours our rich heritage. It is a privilege to work with such rare liquid, these special cask-finished whiskeys really are our greatest treasures."
Colum Egan / Master Distiller at Bushmills.

We attended a launch event in London a couple of months ago where we sampled the two UK exclusives - the 2000 Port Cask and 1991 Madeira Cask Finish. We have also sampled three of the remaining 10 whiskeys - the 2011 Banyuls Cask Finish, 1995 Marsala Cask Finish (pictured, above right) and 32 years old Port Cask. Our thoughts and tasting notes are below.

Bushmills 2000 Port Cask
UK exclusive / First-fill Ruby Port barrel for full maturation / 1327 bottles / 54.1% ABV
The colour is deep gold with a red/amber tint and the nose is packed with rich and sweet aromas of caramel, fudge and dried fruits. Prune, raisin and currant are particularly prominent. They are supported by further aromas of milk chocolate, candied orange peel and baking spices.
On the palate this whiskey feels spicy, woody and peppery to begin with. These are quickly overtaken by rich and sweet notes including caramel and dark dried fruits (think of the prune, raisin and currants from the nose especially). In addition there are also some red fruits (imagine hints of raspberry and brambles) and a suggestion of toffee apple. A distinctive note of orange oil and citrus blossom rises but is quickly overtaken by plenty of warming oak spice. The finish continues the drying and spicy theme, and shows a late note of bitter chocolate.
Bushmills 1991 Madeira Cask Finish
UK exclusive / Bourbon & Oloroso casks then 15 years finishing in Madeira barrels / 738 bottles / 50.2% ABV
The colour is vibrant gold and the nose fruity, sweet and equally as vibrant. Aromas of sweet sultana, toffee, vanilla fudge and candied orange rise from the glass. Then comes a mix of milk chcoolate and ginger cake, followed by a hint of espresso coffee and earthy wood spices.
On the palate this whiskey feels viscous and rich. Juicy fruits (think of those sultanas again, plus peach and apricot with ripe tropical notes) mingle with golden syrup, milk chocolate and zesty orange peel. A hint of coffee also comes through as on the nose. It feels sweet and soft before turning drier and spicier on the finish - warm gingerbread and cinnamon cookies are to the fore, followed by tannic oak spice. The warmth and spice carries through to a finish that is long and enjoyable. A late pinch of brown sugar rounds things off nicely. This has a real 'old school Irish whiskey' quality to it.
________
Bushmills 2011 Banyuls Cask Finish
53.6% ABV
The colour is deep gold and the nose shows a wonderful mix of fruity, sweet and floral aromas. Dried berries, raisin and sultana come through first and are followed by toffee, muscovado sugar and milk chocolate. These aromas are supported by heather honey, earthy baking spices and a hint of rose petal.
On the palate this whiskey feels rich and creamy but with a good pinch of peppery spice. Caramel and toffee marry wth further notes of red apple and crisp green pear. Then comes a distinct hit of milk chocolate along with dried coconut and cocoa powder. The dried berries and raisins from the nose are never far away, although the sultana takes a little longer to develop. A blob of golden syrup and hefty pinches of cinnamon, clove and mace add depth and complexity. The finish is warming and increasingly dry and woody with a bitter hint of tannin.
Bushmills 1995 Marsala Cask Finish
57.8% ABV
The colour is a deep coppery amber and the nose is luscious and juicy. Plump dried fruits such as sultana and raisin are quickly joined by ripe tropical fruits, most notably pineapple and papaya. There is also a hint of green mango. Sweetness is provided by a lovely aroma of honeycomb backed up by butterscotch.
On the palate this whiskey packs a punch. Once it settles then it is the luscious juicy fruits that rise first. Ripe peach and apricot mix with the pineapple, papaya and plump dried fruits from the nose. There are also hints of confected citrus fruits such as candied lemon and lime. With time comes an increasingly influential woody spice note that is reminiscent of cinnamon, cassia bark and toasted oak. This adds incredible depth and seems to exaggerate the sweeter fruit characteristics. Late notes of milk chocolate and butterscotch lead towards a drying and wood spiced finish.
Bushmills 32 years old Port Cask
53.8% ABV
The colour is pale gold and surprisingly light for something of this age. The nose is packed with deliciously sweet aromas - think of brown sugar, golden syrup and candy floss married with apricot jam, tropical fruit compote and vanilla fudge. It is a heady, uplifting and enticing combination.
On the palate this whiskey is elegant, rich and classy. Opening notes of milk chocolate and golden syrup are quickly joined by a good pinch of baking spice - imagine cinnamon and all-spice with hints of star anise and clove. Then comes wave after wave of sweet ripe fruitiness. First there is pineapple and mango, then apricot and peach, before a final hit of something reminiscent of lychee and maraschino cherry. The combination is delicious. Late savoury notes of old cigar box, cedarwood and a hint of leather give even more depth and complexity. The finish is long and sweet, before turning savoury with a distinct woody dryness right at the end.
posted by Matt C at 4:37 PM