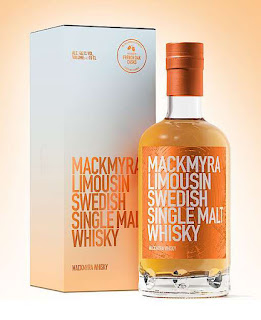 This whisky is the latest seasonal limited edition release from the Swedish single malt distillery of Mackmyra. The Mackmyra Limousin is a limited edition that features ex-Cognac barrels from Pierre Ferrand. Ferrand is one of France's oldest Cognac houses and was founded in 1702. These barrels are made of the renowned Limousin oak, a sub-species of European oak that is often used to mature Cognac eaux-de-vie and Bordeaux wines. Ferrand barrels are made to a specific size of 270 litres for the brand. Other casks featured in the recipe include ex-bourbon, ex-Oloroso sherry, virgin American oak, plus Swedish ex-cherry wine and ex-forest raspberry wine.

Mackmyra was founded in 1999 by eight friends who decided to build Sweden's first single malt distillery. The original distillery was replaced in 2012 by a larger new eco-friendly distillery in the town of Gävle. This state-of-the-art distillery is 37 metres high, cost an estimated £50 million to build and uses gravity during production - malted barley is fed in the top and new make spirit comes out of the bottom. The distillery has won an Icon of Whisky award for sustainability. The annual production capacity is around 525,000 litres.

The Mackmyra Limousin is released at 46.1% ABV and there are just 16,000 bottles. These will be available in selected worldwide markets including Germany, Sweden and the UK. A bottle will cost £60/ €70/ 730 SEK.

The colour is vibrant gold and the nose is sweet, fruity and bright. Aromas of baked apple dusted with cinnamon and orange peel are joined by dried fruits (especially plump juicy sultanas), vanilla custard, white chocolate and a crack of black pepper. Underneath are hints of cocoa and freshly sawn oak.

On the palate the whisky is just as bright and vibrant. Distinct notes of candied orange peel and vanilla shortbread rise first and are quickly joined by raisins, sultanas and the baked apple from the nose. With a little time, further notes of over ripe pear, milk chocolate and gingerbread begin to evolve. Then comes something reminiscent of marzipan and peach. The combinations are delicious and have great depth and complexity. Late hints of caramel, citrus oil and pinches of cocoa powder and cinnamon round things off nicely.

The finish is of decent length and becomes more woody and spicy with time. This is especially true once the sweet and fruity elements begin to fade. The juicy dried fruits go first, then the sweet baked apple and finally the vanilla and chocolate. This leaves an increasing warmth and dryness.

We have long been big fans of what Mackmyra are doing, and their seasonal range in particular. They use it as an experimental platform to showcase less common cask types in particular. Pierre Ferrand is a Cognac house of fine repute, and their barrels really shine here. The result is a deliciously vibrant and Spring-like whisky that should prove to be a real crowdpleaser.