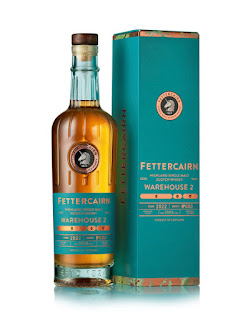 This whisky is the latest limited edition release from the east Highland distillery of Fettercairn. It is the third bottling to appear in the Warehouse 2 series. Batch 003 follows the first two batches from 2021. The series is designed to showcase some of the hidden gems maturing within Fettercairn's 14 dunnage warehouses. There are three cask types that feature in this new batch - ex-bourbon and ex-rum barrels, plus ex-red wine barriques from France. These have been used in the percentages of 57%, 16% and 27% respectively. All were distilled and filled in 2015. The casks were hand-selected and then married together by Gregg Glass, the Whisky Maker for Fettercairn.

The Fettercairn Warehouse 2 Batch 003 is bottled at 50.6% ABV. The exact number of bottles has not been revealed but they will be available through specialist whisky retailers in selected world markets. A bottle should cost £60/€70.

The colour is golden yellow and the nose is heady and fragrant. Aromas of honeycomb and green apple lead the way and are followed by fudge, toffee and milk chocolate. There is also a whiff of tropical fruits (especially mango and apricot) with a hint of red berries and cinnamon stick.

On the palate this whisky is lively, bright and expressive. Initial notes of heather honey and vanilla custard give way to something much more fruity. Crisp green apple and pear kick this off and are quickly joined by further fruity notes of sultana, red berries and the tropicals from the nose. The mango and apricot are joined by hints of pineapple and peach. Hints of crumbly brown sugar, toffee and butterscotch accentuate the sweetness. Underneath is something a little earthier and spicier. The woody oak tannins combine with cinnamon, white pepper and a hint of gingerbread to give decent warmth and depth.

The finish is good and those spices from the late palate help to draw it out further. A hint of burnt orange peel appears alongside the sweet and fruity notes. These slowly fade to reveal the peppery heat, which is the only real suggestion of the whisky's youthfulness.

This is another fine effort from Fettercairn. We have sampled and enjoyed each of the Warehouse 2 series to date. Each has been pushed in a slightly different direction and it will be interesting to see what appears in the collection down the track. Marrying rum and red wine casks should be tricky, but they have been skillfully combine here to create a lovely, vibrant and bright whisky. And at a decent retail price too.