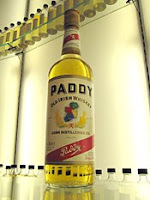 Paddy is an Irish whiskey that has a rich heritage. It was first produced by the Cork Distilleries Company in 1779 and was called Cork Distillery Old Irish Whiskey (not the catchiest name, was it?). In 1881, a new salesman joined the distillery and he was soon to become legendary. His name was Paddy Flaherty and his sales technique and figures led to the profits of Cork Distillery Old Irish Whiskey rocketing. His name became synonymous with the product to the point where people all over Ireland would ask, "Have you tried Paddy's whiskey?".

The name was changed by popular demand in 1912 and Paddy whiskey has been available ever since. The whiskey is distilled three times (as most Irish whiskies are) in small pot stills. It has a particularly high malted barley content compared to other Irish whiskies and is then matured in ex-bourbon casks for seven years. Sadly, Paddy is now increasingly hard to find in the UK following the decision by Midleton, the current owners of the brand, to restrict the export of it and some of its other brands. If you can find a bottle (check out smaller convenience or liquor stores especially - that's where we found it), then it should cost £15-20.

As mentioned, Paddy is now made at the Midleton distillery, which is located in the southern part of Ireland in County Cork. Midleton was founded in 1975 following the joining of the Cork Distillers Company, John Jameson & Son and John Power & Son in the late 1960s. This group was called the Irish Distillers Group. They built the new distillery, which is now the largest in Ireland and one of the largest in Europe with an annual capacity of 19 million litres. Some of the most famous names in the Irish whiskey industry are made at Midleton, all to their original traditional recipes. These include Jameson, Midleton Rare, Powers, Redbreast and Tullamore Dew.

The colour of Paddy is a pale golden yellow and the nose is aromatic and clean. There is plenty of fresh vanilla and malted cereals up front, before they are joined by some lovely honey, nutty (think of almonds and hazelnuts), oaky and grassy notes (imagine dried grasses or hay). On the palate, this whiskey is mild, soft and light with the mellow malted barley and vanilla again particularly prominent. A very strong honeyed note then comes through and this is joined by other elements - sweet coconut, some toffee, more grassiness (dried hay again), toasted nuts (almonds especially) and some woody spice (think of cinnamon). The finish is soft, sweet and very malty and grainy. The finish lingers for a good length of time considering the general lightness of the whiskey. It becomes quite dry and woody right at the end and this is joined by a strange slightly metallic note.

Paddy is a lovely, light and fresh whiskey ("quaffable" we once heard it described as!). It is very easy drinking and would be a great introduction to Irish whiskey for a beginner. The whiskey is uncomplicated but thoroughly enjoyable and refreshing. The good pricing also means that it represents decent value for money (if you can find it...).
posted by Matt C at 3:48 PM

once tasted it in a session of our "group" in which we tasted irish malts (hebrew post, so i wont put a link to it, unless u want).
it's a simple , uncomplex dram. i don't remember it stood up from the crowd :)
i do remember the Jameson gold as a favorite, but again it's much more expensive.

Paddy was recommended to me recently by a bartender(I live in New Jersy, USA). We were discussing Whiskeys and he suggested that if I like a 'lighter, slightly sweeter' whiskey, I should try Paddy. The next chance I got I went to my 'Premium' liquor store, and luckily they had one bottle of Paddy left on the shelf. I tried it straight away when I got home and it was Love at First Taste! This Whiskey has none of the 'Bite' or 'Burn' that I don't like in Whiskeys, and it indeed does have a slightly sweeter hint than other whiskeys. I still love my Jameson Gold and several Middleton varieties, but Paddy is going to occupy Center Shelf in my home bar from now on!

I want a bottle. Where can I find one in The USA Texas El Paso
arturo1st.2@gmail.com

I want a bottle. Where can I find one in The USA Texas El Paso
arturo1st.2@gmail.com