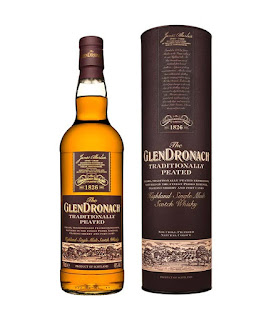 This whisky is the new smoky addition to the core range of the highly regarded east Highland distillery of Glendronach. The Traditionally Peated pays homage to the robust earthy smoke that would have been prevalent throughout the distilleries in the Highlands during the first half of 19th century when Glendronach was founded. It combines rare smoky spirit, which is only made at the distillery for a short period each year, which is produced using peat cut in Aberdeenshire - this has a softer, gentler and sweeter feel than that taken from areas more famous for peaty whisky, such as Islay and the western isles. It is also specially malted locally for the distillery.

The Glendronach distillery was founded in 1826 by James Allardice and lies in the heart of the Aberdeenshire countryside, close to the town of Huntly. The majority of the present buildings date from 1850 when the distillery was rebuilt following a devastating fire and it was the last in Scotland to use stills directly fired by coal - this practice only finished in 2005. The distillery is owned by American drinks company Brown-Forman and currently produces around 1.3 million litres of spirit annually. The production of peated spirit was only started in 2009.

The Glendronach Traditionally Peated has been maturing in three types of cask - ex-Oloroso and ex-Pedro Ximenez sherry barrels, plus ex-Port pipes. These have been married together by Dr. Rachel Barrie, the Master Blender at Glendronach. It is bottled at 48% ABV, is non chill-filtered and of natural colour. Traditionally Peated is available from selected specialist retailers worldwide with a recommmended price of £51/ $66 US per bottle.

Our tasting notes
The colour is deep golden yellow and the nose is full of sweet and earthy aromas - think of caramel, toffee and raisin to begin with and then sweet malted cereals, golden syrup and a blob of treacle following. Underneath is a distinct aroma of candied orange peel along with sweet peat smoke and some earthy dusty spices - imagine clove, cinnamon and toasted oak.

On the palate this whisky has a distinct earthiness and maltiness to begin with. Soft, sweet peat smoke and Autumnal leaves mingle with cigar wrapper leaf and robust bittersweet malted barley. Then come the rich notes from the ex-sherry and Port casks - think of dark dried fruits here (especially raisins, sultanas, figs and candied orange peel), milk chocolate, toasted nuts (think of walnuts and brazil nuts in particular) and a heavy pinch of warming wood spice (cinnamon, all-spice and hints of clove and white pepper). Further underlying sweetness comes through in the form of heather honey, golden syrup, caramel and a hint of black treacle.

The finish is long and warming. The sweet characteristics seem to elevate the peat smoke and warming spice notes, adding weight and robustness to the whisky. These begin to fade and take the whisky in a drier and more savoury direction.

What's the verdict?
Glendronach is famous for its big and bold nature, which stems from the heavy and oily spirit that they produce there in combination with expressive ex-sherry cask maturation. This whisky exhibits all of that, with some additional help from some ex-Port barrels, but heads in a different direction to what most fans of the distillery would expect.

All Highland whiskies would have had some element of peat back in the day, as this would have been the only available fuel for drying barley during the malting process. This whisky pays homage to this traditional style of spirit and is an interesting addition to the Glendronach range. Also, considering its rarity the price is not too bad either.