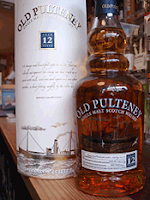 The Old Pulteney distillery is the most northerly mainland distillery found in Scotland. Located near to the town of Wick and not far from John O'Groats, it is also one of the most environmentally friendly distilleries with the excess thermal energy produced there being used to heat over 1000 local homes. It is owned by Inver House and produces around 1 million litres of whisky a year. Old Pulteney's core range is small and consists of this 12 years old, a 17 years old and a 21 years old. Independent bottlings are few and far between but generally of high quality (see in the whisky cupboard ...). The brand has grown massively in the last three years and this has seen Old Pulteney climb into the top 20 for world sales of single malt. This 12 years old is consistently one of the top sellers at Royal Mile Whiskies.

The colour is orangey gold and the nose is very promising with vanilla, some fruitiness (think of a crisp green apple) and a whiff of saltiness (think of sea air). The palate is rich, creamy and full bodied. It has a mixture of elements that marry together surprisingly well. The vanilla and fruit from the nose are there but are joined by some sweetness (imagine honey), nuts (think of almonds, but almond essence I think as it's slightly fake) and a hint of something bitter (like dark chocolate or coffee beans). The saltiness is also there and adds a fresh tang to the whisky (this flavour is present in whiskies that are matured near to the sea, as the wooden casks are porous and breathe in the sea air over time). This is a very good whisky and it is easy to see why it is so popular in the shop, as it combines excellent quality with a decent price (normally around £25, making it one of the best whiskies that you can buy for around that price mark, in my opinion).
posted by Matt C at 10:18 AM