Laphroaig (pronounced la-froyg) is one of the most famous distilleries in the world. Located on the island of Islay, this iconic distillery was founded in 1815 and has been the best selling smoky malt worldwide for the last six years. As a result, much less Laphroaig whisky now goes to blending, although some does go towards Islay Mist and Ballantine's. The distillery is currently owned by Jim Beam Global, who are the fourth largest spirits company in the world, and it is running at full capacity (around 2.5 million litres a year) in order to meet the current demand. Laphroaig is one of the few distilleries left that have their own floor maltings (this is a traditional room where the barley is left to shoot, releasing the natural sugars that later get turned to alcohol). The malted barley is then dried by a peat fuelled fire for 18 hours and this gives Laphroaig it's intense and smoky flavours. The malt is around 55ppm (phenols per million). the whisky is then matured in bourbon casks from the Maker's Mark distillery in Kentucky, America.

Prince Charles issued a royal warrant to the distillery in 1993 as it was one of his favourite whiskies and as a result they can display the Prince of Wales crest on their bottles. The core range consists of two 10 year olds (one of which is cask strength), a 15 years old, a 25 years old and a quarter cask (which is matured in smaller casks). Other limited bottlings are released occasionally but are normally pricy. Independent bottlings are readily available and represent good value. Here are the two 10 year olds. 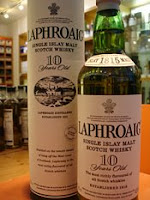 Laphroaig 10 years old
This is one of the most widely available and best selling whiskies in the world. It sells more than any other single bottle of Islay whisky and is a whisky icon with it's green bottle and black and white simple label and tube. This is bottled at 40% ABV and is golden amber in colour. The nose just blows you away. No other drink in the world has the type of smoky characteristics that the Islay malts have and this is a classic example. This is full of rich, sweet peaty smoke (imagine green moss and earth) and these are mixed with a salty note (that reminded me of seaweed or sea air). The palate is rich as well with that intense smokiness (a bit more like a bonfire now) and saltiness revealing more sweetness underneath (think of honey and caramel). It is so intense that it has an almost antiseptic quality on your tongue (this is caused by the high phenol levels in the malted barley) and there is a bitterness right at the end (like iodine). Both of these are classic Laphroaig characteristics. The finish is long with that smoke, peat, earth and bitterness lingering on and on. This is a great example of an Islay whisky, although they are not to everyone's taste. This should cost anywhere between £20-30 depending on how lucky you are. 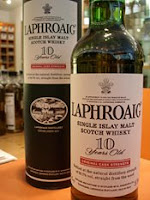 Laphroaig 10 years old cask strength
This is the even more intense sibling of the 10 years old. Bottled at 55.7% ABV, this whisky consistently wins worldwide awards but is less popular due to it's strength. The nose is very earthy and peaty (think of damp moss) and the smokiness reminds of the embers of a bonfire. There is a medicinal note (imagine antiseptic) that joins a salty seaside character. This sounds a strange mixture but they marry together very well. However, this style of whisky is an acquired taste. This attacks your palate with a sensuary overload. There is sweet vanilla and malted barley, honey, caramel and dried fruit (like sultanas) all of which battle with the luscious and intense smoky and peaty flavours. Upon adding water, these mellow slightly and allow a salty note and something bitter through, that reminded me of tobacco leaves. The finish is very long, savoury, complex and very smoky and earthy. This whisky is definately not for the faint hearted! A bottle should cost £40-45.
posted by Matt C at 4:40 PM

I dont understand LP10 40% at all. only islay I had was Bruich Peat. That fix me up. Plus the Wood smoke hint in some blend. Getting no Phenolic arrival with LP10 40% just some unknown woody smoke residue in nose without the pleasing effect. And an unknown sweetness that is not fruit. No salt. More in Teachers Blend. I read somewhere that LP has altered this starter to make it more easy going for general consumer. I think they over did it. I have drunk 3/4 of it. trying not to be fussy. Still dont get it. The water is not ocean like. more like a lake. I could the unchilfiltered one in mind but old pulteney 12 40% is not my thing if its similer. I will try Ardbeg as buring Tar phenolics would suit me.