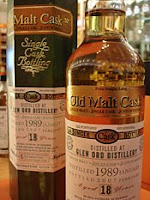 Glen Ord is a distillery that is located in town of Muir of Ord, to the north of Inverness in the north Highlands. This area is referred to as the 'black isle'. This name comes from the colour of the soil and is one of the most fertile farming regions in Scotland. The distillery was founded in 1838 and the location was selected due to its proximity to the abundance of quality barley, dark peat and fresh local spring water. The distillery is currently owned by multi national drinks company Diageo and it is one of their largest. It produces over three million litres of whisky a year but remains one of Diageo's least known distilleries. The main reason for this is that the majority of whisky made at Glen Ord is taken to use in the owner's world famous Johnnie Walker blended range. However, Diageo are looking to increase the popularity of the single malt and expand the range, as the world's thirst for whisky continues to increase. While Glen Ord is relatively unknown in the UK, its most popular markets are America and South East Asia. The distillery releases just one regular bottling - a 12 years old - although this is supplimented by occasional older versions. Independent bottlings are rarely found but are worth trying if found.

This bottling is released by an independent bottling company called Douglas Laing & Co. They are based in Glasgow and have been bottling whisky since 1948. They buy casks from different distilleries around Scotland and bottle them in a number of ranges. This range is called 'Old Malt Cask' and everything is released at 50% ABV and is from just one cask, so the amount of bottles available in each release is very limited. This Glen Ord is an 18 years old and is one of just over 800 bottles. The colour is rich and golden and the nose is very promising. It is full of vanilla and coconut with a hint of warm spice (imagine nutmeg or cinnamon). This is warming and full bodied on the palate with lovely, creamy vanilla sweetness, a good level of malted barley that gives a slight bitterness, some warm spices (especially ginger, I think) and just a tiny hint of smokiness in the background. Due to the strength of alcohol, I decided to add some water and this really brought out that gingery spiciness, some coconut and maybe a floral note (imagine heather). The long and creamy finish makes this a very good all round whisky and is a bargain at £60ish a bottle, considering the quality, the limited release and the age.
posted by Matt C at 11:48 AM