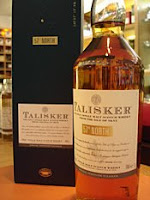 Talisker is an iconic Scottish whisky that is produced by the only distillery on Skye, an island that lies off the north west Highland coast. The distillery is owned by multi national drinks giant Diageo and they have recently given the brand a lot of promotion, resulting in sales rising by 40% in the last three years. Talisker continues to win prizes around the world, culminating in their 18 years old winning 'Best Single Malt' at The World Whisky Awards in 2007. Some of the whisky produced there goes towards Diageo's famous Johnnie Walker blended whisky range but most is released as single malts. The core range is small and top quality and contains this 10 years old, the 18 years old and a 'Distiller's Edition' that is finished in Amoroso sherry casks. A 25 years old and a 30 years old are also released as limited editions. Independent bottlings are rare and two of the most popular are called 'Tactical Director's' and 'Isle of Skye', as Diageo do not allow anyone else to use the Talisker name.

This 57° North is a limited but new addition to the Talisker range. The name is derived from the point of latitude on which the distillery is situated and I recently had the pleasure of trying this in the company of Mark Lochhead, the Distillery Manager at Talisker. It is bottled at cask strength (57% ABV) and has secured this limited UK release following a successful release in the Duty Free/ travel retail sector. The colour is golden and the nose is full of dried fruit (think of sultanas), something spicy (imagine black peppercorns - Talisker is famous for having this unique characteristic) and peaty smokiness (imagine a bonfire or embers in a fireplace). On the palate, this is full bodied and feels thick in your mouth. The power of the alcohol is balanced with intense and complex flavours. There is a mixture of sweet malted barley, vanilla, that dried fruitiness and smokiness from the nose, maybe just a hint of saltiness and some warm spices (that pepper again, with some nutmeg possibly). A touch of water really brings out the sweetness of the barley and the peat at the expense of some fruitiness. The finish is long, warming, smoky and spicy. 57° North is an truly excellent whisky and should cost around £50-55 a bottle from independent retailers.
posted by Matt C at 10:27 PM