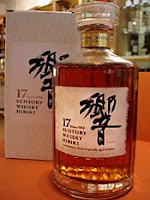 The Hibiki is a blended whisky from the Japanese company Suntory. It rose to prominence in 2008 by winning the 'Best Blended Whisky' category at the World Whisky Awards - the first time that a Japanese whisky had won such a prestigious prize. Hibiki was first bought to a wider audience when it feature in the movie Lost In Translation, where Bill Murray was advertising 'Suntory Time ...' at the beginning of the film. Suntory owns two whisky distilleries in Japan. These are Yamazaki (Japan's oldest founded in 1923) and Hakushu which was founded during the 1970s. Hibiki is a blend of single malts and grain whisky from these two distilleries and is released with a minimum age of 17 years. In Japan, when producing blended whisky each company will only use whisky from their own distilleries. This differs from Scotland where the trade of blending whiskies between different companies is big business. Hibiki means 'harmony' in Japanese.
The first thing to note is Hibiki's extraordinary bottle. It is a great mix of a whisky decanter and 1970s retro design. The colour of the whisky is dark amber and the nose is fruity (imagine dried fruit like sultanas and citrus peel) and malty (think of sweet grains). There is also some vanilla, some woodiness and a nutty element that comes through (think of toasted almonds, maybe). The single malts in Hibiki have been matured in sherry casks and the influence continues on the palate. That dried fruitiness (especially the citrus candied peel) and woodiness are more prominent, with the other elements from the nose present being joined by something slightly bitter (imagine a dark chocolate). There is the slightest hint of some peaty smoke in the background also. The finish is quite short and I was surprised that it felt as light and thin in my mouth as the nose especially, suggested something richer and heavier. This is a good blended whisky that is smooth, velvety and easy drinking. It is easy to see why it is popular and wins awards, although it is a bit pricy at around £60-65 a bottle.