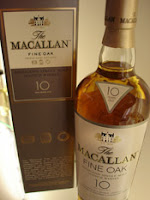 Macallan is one of the most famous distilleries in the world. Its extensive range of whiskies are some of the best selling around the globe and Macallan is consistently in third place for sales, behind only Glenfiddich and Glenlivet. The distillery is one of Scotland's largest and has a production capacity of 6 million litres a year. It has a lot of stills (21 to be precise) but each one is small, fat and stands at less than 4 metres tall. This produces the richer, creamier spirit that people enjoy around the world and that Macallan has become reknowned for. Their success has been based on a change of strategy about 10 years ago. Macallan was already popular within the UK market but they decided to produce whisky exclusively for the travel retail/ duty free sector. That decision has proved a great success, as Macallan now lies in second place behind Glenfiddich for world sales in this market. Another strategic decision was taken to expand the range by moving away from their traditional sherry cask maturation. Maturation was started in sherry casks but then the whisky would be transferred to bourbon casks. This series was named 'Fine Oak' and was first launched in 2004. Macallan traditionalists were up in arms but again, the decision has been a great success.

With this 10 years old 'Fine Oak' (the newest edition to Macallan's range), the colour is a yellow amber. The nose is full of vanilla and malty sweetness with something a bit yeast like coming through. There is also some dried fruitiness present (think of sultanas). On the palate, this is light and soft but quite creamy (not as rich as I was expecting). There is vanilla and malt (imagine a sweet style of bread) with some dried dark fruit present also (think of raisins and candied citrus peel). An interesting biscuity note (like a digestive biscuit) joins these. The finish is full of the sweet vanilla and grains and more buttery in flavour than the nose or palate. It is still light and this makes the finish quite short. This is a good whisky that is clean, fresh and very approachable and drinkable! It would be a great choice for someone as an introduction to whisky, as a present if you aren't sure what they like or to refresh your palate on a warm day. It is easy to see why this Macallan is so popular around the world and it is widely available. This 'Fine Oak' is a bargain at £25-30 a bottle.
posted by Matt C at 11:14 AM