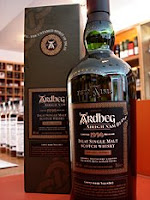 Ardbeg is a distillery on the western Scottish island of Islay. They produce some of the world’s peatiest and smokiest whiskies at the distillery and the island itself is the home of this style of whisky. The first record of a distillery on the current site was in 1794, although the official Ardbeg founding date is 1815. The distillery is currently owned by Moet Hennessey and despite its relatively small capacity (only one million litres per year), Ardbeg has an extensive core range that is complimented with regular limited release bottlings. Ardbeg’s whiskies have a worldwide cult following and boasts an interactive distillery website that is second to none. Take a look at www.arbeg.com.

The Airigh Nam Beist (pronounced arrig-nam-bay-schst) is an expression of Ardbeg that is released at 16 years of age. The name comes from the Gaelic for ‘valley of the beast’ and refers to an ancient story of a monster that lived in the small Loch Airigh halfway down the valley and used to regularly terrorise local villagers. A stream runs from Loch Airigh and passes next to Ardbeg distillery and then out to sea.

The colour is golden amber with a dark earthy brown tinge to it. The nose gives an immediate hit of rich peaty smoke that turns quite meaty (imagine barbeque smoke and leather). Other elements that come through are gorgeous sweet grains, vanilla, something spicy (think of ginger) and some dried grasses (almost like burning grass or hay). On the palate, this is rich and robust yet rounded. It feels almost oily in the mouth with the earthy, meaty peat smoke having a warm peppery edge to it. The meatiness become very bacon-like, especially with water. The other characteristics from the nose are all present with the sweet barley and vanilla particularly prominent. They are joined by a nutty quality (think of toasted nuts or seeds) and an interesting citrus tang (imagine limes). The finish is complex and very long with the smokiness burning away for ages, complimented by the refreshing zingy citrus note.

Airigh Nam Beist will be replaced shortly in Ardbeg’s core range with a younger cask strength whisky called Corryvreckan. This is a shame as it is a very good example of a smoky whisky that has won lots of awards around the world. It is worth trying a dram or buying a bottle before it disappears and stocks should still be available from specialist whisky retailers for the next couple of months. The cost should be around £50 a bottle.
posted by Matt C at 1:43 PM

I was on Islay for the 2009 Feis Ile, and was fortunate to be treated to a dram of "The Damned Beast". What a wonderful dram !!!

I found a bottle of this right around Christmas 2010 in DC for $70! Just cracked it last night, and it is SO GOOD. I have never been a fan of Ardbeg 10, at all. In fact I seriously dislike it. So I didn't understand all the fuss about these guys, until I tried the Uigedail (I'm spelling this wrong) a few weeks ago, which is very good, and I think I like the Beist even better! Peaty, creamy, vanilla-y, a little meaty. Very unique.