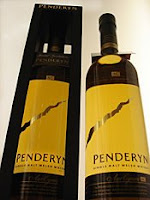 Penderyn (pronounced Pen-derrin) is the only single malt whisky distillery operating in Wales. Located in the village of Penderyn in the Brecon Beacons National Park in south Wales, the distillery is one of the youngest in the UK. It is owned by the Welsh Whisky Company, which was formed in 1998 and production began in September 2000. Penderyn is the first distillery to produce single malt whisky in Wales for over 100 years with the last one, Frongoch, closing in the late 19th century.

The production at Penderyn is unique as they buy pre-made wash from a local brewery and then distil this in to whisky. This is illegal in the Scottish industry where the mashing and fermentation must happen on the same site as the distillation. Their range is small and consists of this regular bottling (which is around seven years old) and a lightly peated version of the same age. New expressions are being added regularly as more stock reaches maturation.

All Penderyn whisky is matured in bourbon casks and then finished in Madeira casks. There are not many distilleries that use Madeira casks, despite them being cheaper than port or sherry casks. The colour is very light and almost straw-like with an interesting nose. It is light yet fragrant with some vanilla, fresh fruits (think of apples and pears) and something herbal (imagine dried grasses). On the palate, this remains light but has an initial bitter woodiness that fades to give some sugary caramel and malted barley cereal notes. Then the vanilla, fresh fruit and herbal elements from the nose come through. The finish is reasonably long for something as light as this and is quite refreshing, although that enjoyable sugary sweetness gives way to that woody bitterness right at the end.

This Penderyn is light, enjoyable and refreshing and would be a good choice as an aperitif or on a hot day, although the herbal grassy note may not be to everyone’s taste. The bottle and packaging are tall and distinctive and should cost around £30. We tried it in Wetherspoon’s, the UK’s largest national pub chain, who have just introduced it for £2 a dram. Definitely worth a try for that price!
posted by Matt C at 11:32 AM

Great tip, I'll need to pop along to a Wetherspoons at some point this week and give it a go. I've heard mixed reviews, but as you say it is sometimes the setting and weather that can make or break a dram.