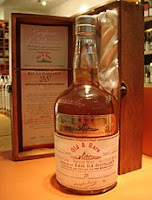 Caol Ila produces some of the peatiest whiskies in Scotland and is located on the craggy north eastern coast of the island of Islay – the home of the world’s smoky whisky production. It is the largest distillery on the island yet remains relatively unknown to the wider audience. The capacity of Caol Ila is 3.5 million litres a year and much of this goes towards the popular Johnnie Walker range of blended scotch whiskies. The percentage of whisky released as single malt is increasing as the current owners, drinks giant Diageo, look to expand the core range to meet the world’s thirst for smoky whisky.

Caol Ila means ‘Sound of Islay’ in Gaelic. The ‘Sound of Islay’ is the name of the narrow, fast flowing stretch of water that separates Islay from the neighbouring island of Jura. The core range currently includes a 12 and an 18 years old, a cask strength version and a more limited ‘Distiller’s Edition’. Other very limited bottlings are occasionally released, including an unpeated version, and Caol Ila is extremely popular with the independent bottling companies. This bottle is released by Glasgow based company Douglas Laing & Co. in their ‘Old & Rare’ range. This range contains whiskies from all over Scotland and they are generally over 25 years of age, with some from closed distilleries.

This whisky is released as a 28 years old and is from a single cask, resulting in just 261 bottles being available. The colour is golden and the nose is very tempting. The initial impression is that it is quite light and fresh for something of this age, with some pleasant sweetness (think of vanilla and cereal grains) and some peaty smokiness (imagine damp earth and moss). On the palate, this has much more complexity. It feels light again but has more sweetness (that vanilla and cereals again) and more peatiness (that damp earth and moss but with more sulphury coal smoke). Added to these are a zingy citrus note (think of lemon zest), some tropical fruit (especially mango and pineapple - sounds odd I know!) and something bitter and herbal (imagine iodine). It is bottled at 54.2% ABV, so we tried it with water and it became lighter, less smoky but sweeter and more herbal (imagine dried grasses). The finish is long and enjoyable with lots of sweet earthy smoke and a slight antiseptic quality (this characteristic is common in some of the heavily peated Islay whiskies).

This Caol Ila is a lovely example of a complex yet rounded older smoky whisky. It has a refreshing lightness and finesse that some of the younger Islay single malts can lack. The only way to get older versions of Caol Ila is through independent bottling companies such as Douglas Laing & Co. and they can be found in specialist whisky retailers. A very good whisky that will cost around £175 a bottle.
posted by Matt C at 7:07 AM