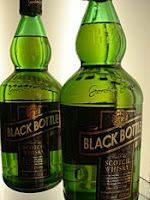 Black Bottle is a blended scotch whisky. It is unique as it contains single malt whiskies from seven out of the eight distilleries on the famous whisky producing island of Islay. These are combined with a number of grain whiskies to produce the blend. Islay is famous for its smoky, peaty whiskies and can be found off the south western coast of mainland Scotland. The seven distilleries included in Black Bottle are Ardbeg, Bowmore, Bruichladdich, Bunnahabhain, Caol Ila, Lagavulin and Laphroaig. The exception is the new distillery Kilchoman which is small and has only been in production for a couple of years.

The brand is currently owned by Burn Stewart Distillers and the blending of Black Bottle is based at Bunnahabhain (pronounced bunna-ha-ven), its only distillery on Islay. It was first blended in 1879 by a company called Gordon Graham & Co (whose name still appears on the bottle and cap) and got its name as it was originally filled in to bottles made from black German glass. This was changed to the green bottle in 1914, due to the outbreak of the First World War and the boycotting by many companies of German products.

The colour is light and golden with an intriguing nose. It feels fresh with some dried fruit (think of sultanas), sweet vanilla, some cereal grain notes and a powerful whiff of peaty smokiness (imagine damp, freshly dug soil). On the palate, this is again light and refreshing with an interesting mixture of three main elements - sugary caramel immediately on the tongue then earthy smoke and gorgeous vanilla. Other notes that come through are some further sweetness (think of honey) and a strange hint of spice (reminding me of cloves). The finish is long with a herbal grassy note (think of dried grasses) joining the sweet cereals and vanilla, with the smokiness burning away and fading gradually.

Black Bottle is an extremely well rounded and enjoyable whisky. It is smoky but not a smoky as expected, considering a number of the world's smokiest whiskies are included in the blend. The balance between the non smoky single malts, the grain whiskies and the smoky ones is very good and gives a surprisingly light refreshing feel at all stages of tasting. An excellent dram, especially considering it only costs around £15 a bottle, and one of the best smoky blends that I have tried to date.
posted by Matt C at 1:59 PM

indeed a fine blend. one of the best islay blends.
i also seem to like Islay mist in the same category which is more influenced by Laph.
slainte!
10x for the intercept on twitter and the link. i love your site.