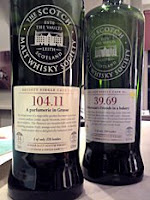 On our recent tasting evening at the London headquarters of The Scotch Malt Whisky Society, we sampled another couple of whiskies in the members’ bar. The Scotch Malt Whisky Society is a members club that bottle single casks of whisky from distilleries all around the world. The majority are from Scotland with 126 distilleries represented. They use a numbering system for their labelling, rather than naming the distillery. In this system, the first number is the distillery ID and the second is the number of the cask that has been bottled from that distillery (for example, using one of the whiskies below – 39 is the distillery ID for Linkwood and 69 represents the 69th cask that the Society have bottled from Linkwood). We randomly picked two distillery numbers and this is what we got …

39.69 Linkwood 26 years old
Linkwood is a distillery from the Speyside region of Scotland. The distillery was founded in 1821 and is located in the town of Elgin. It is currently owned by drinks giant Diageo and they use most of the whisky produced at Linkwood for blending, especially in Bell’s which is one of the UK’s best sellers. Only about 2% of the annual two million litres of whisky produced there gets released as single malt. The colour is golden and the nose is light yet fragrant. There is lots of vanilla, caramel and herbal notes (think of dried grasses and leaves). On the palate, this feels thick and quite syrupy in the mouth. The caramel becomes more toffee/butterscotch-like and the grassiness is particularly prominent. This is counteracted by a zingy citrus note (imagine lemon zest) and results in a refreshing feeling. The finish is complex and reasonably long with the vanilla and malted barley cereal coming through. Finally, this becomes quite dry, tannic and woody but this is not unpleasant.

104.11 Glen Craig 34 years old
Glen Craig is a very rare single malt whisky that was produced at the Glenburgie distillery between 1958 and 1981. Glenburgie is a Speyside distillery that can be found between the towns of Elgin and Forres. It is currently owned by Pernod Ricard, who use it in their popular Chivas Regal blends. Some also goes to other best selling blends, such as Ballantine’s and Teacher’s. Less than 1% of the four million litres produced there every year gets released as single malt, with the only way to buy it being through independent bottling companies. Glen Craig was an experimental single malt developed in the late 1950s and produced using Lomond stills – a type of still that could produce differing styles of whisky by adjusting its components. Production was stopped when these Lomond stills were dismantled and the whisky is now extremely rare.

The colour is a rich dark gold and the nose is very unusual. It is very fragrant and floral (imagine a cross between a feminine perfume and a spring meadow!), with some gorgeous sweet vanilla and cereal grains underneath (think of a digestive biscuit). This nose just made you want to try it and on the palate this is creamy and full bodied. The sweet vanilla and malted barley are there again and are joined by a complex mix of caramel, warm spice (think of nutmeg), tropical fruit (imagine pineapple and mango) and that fragrant floral note (think more of roses this time – sounds odd I know, but its true!). The finish is long, sweet and enjoyable with a hint of nuttiness coming through at the end (imagine a bitter style of nut like a walnut).
posted by Matt C at 7:58 PM