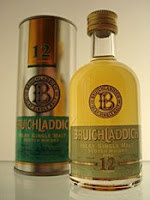 Bruichladdich (pronounced brook-laddie) is the most westerly distillery in Scotland that is currently releasing single malt whiskies. It is located on the the western peninsula of the famous whisky island of Islay and sits on the shores of Loch Indaal. Islay is the traditional home of the world's smoky whiskies but the Bruichladdich distillery style is in contrast to these, being lighter, fresher and generally with little or no peatiness. The distillery was originally founded in 1881 and was built using stones from the local beach. It was also one of the first buildings in the UK to be built using concrete! Bruichladdich means 'the brae (hillside) by the shore' in Gaelic.

Bruichladdich is one of Scotland's most innovative distilleries and one of very few that remain independently owned. Since being taken over by a group of four entrepreneurs in 2000, Bruichladdich has been very experimental with its whisky production and release programme. They are reknowned for maturing their whisky in non traditional wine and dessert wine casks. By experimenting, Bruichladdich's aim is to try and introduce new people to whisky and their innovative range is extensive and they are always updating it with new releases. In contrast to this, the new owners renovated the distillery to its former glory and decided to maintain the traditional whisky making machinery and techniques. There are no computers used for production and it is one of the most traditional and historical distilleries in Scotland.

This 12 years old forms part of the regular core range and can be found in specialist whisky retailers for £30-35 a bottle. The colour is straw like with a golden tint and the nose is fresh and light. There are some lovely notes present that make your mouth water at the prospect of tasting the whisky - sweet cereal grains, vanilla, fresh citrus (think of oranges or tangerines) and just a hint of freshly cut grass. On the palate, this is bursting with interesting refreshing flavours that combine to give a good balance to the whisky. Up front there is plenty of wood (imagine oak) and sugary caramel, followed by that orangey citrus note from the nose. There is also a more tropical fruity note (think of pineapple and mango), as well as some honey, vanilla and malted barley. It is sharp and tangy with a light freshness. The finish is short and clean and begins with that sugary caramel again before turning drier and more oaky right at the end. This again creates good balance and interest.

Bruichladdich 12 years old is an enjoyable whisky that is light, fresh and tangy. This would make it good as an introduction whisky for a beginner as it has complexity but is easy drinking and rounded. It would also mean that it would be great on a hot day, when its sharp refreshing nature would be perfect.
posted by Matt C at 10:33 AM

Kilchoman might have something to say about Laddie being the most westerly distillery. And we won't mention Abhainn Dearg... :)