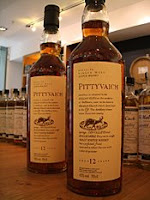 Pittyvaich (pronounced pitty-vek) is a little known and closed distillery that used to be located in the town of Dufftown - the heart of Scotland's Speyside whisky region. It has one of the most short lived histories of any distillery. Pittyvaich was founded by Arthur Bell & Sons in 1974 to produce whisky for their popular Bell's range of blends. It later became part of United Distillers (which in turn later became Diageo) and they had numerous other distilleries that did a similar job to Pittyvaich. They decided to close it down and the last whisky flowed from the stills in 1993. Since then, it has been used to distil Gordon's gin for a short period in the late 1990s and also as a training facility for Diageo employees. The equipment was sold off to Clynelish distillery in 2002 and Pittyvaich was demolished and consigned to history.

Pittyvaich whisky is hard to find, even in specialist whisky retailers, and is becoming harder as time goes by and stocks diminish. Diageo still own most of the remaining casks and release this 12 years old single malt as part of their 'Flora & Fauna' range. This range showcases whisky from some of the lesser known distilleries in their portfolio. Pittyvaich is even harder to get from independent bottlers but some are available especially from Douglas Laing & Co and Gordon & MacPhail.

The colour of this 12 years old is a dark amber with a reddish brown tint, indicating a heavy sherry cask influence. The nose confirms this and is rich and sweet with heaps of dried fruit (think of raisins and sultanas), exaggerated malty cereal grains and caramel. It is highly aromatic with an interesting citrus note (imagine candied orange peel or marmalade) and is a touch reminiscent of a Cognac or Armagnac. On the palate there is again an obviously high influence of sherry cask. The rich sweet maltiness from the nose is battling with powerful dried fruit (those raisins, sultanas and candied orange peel again), a sugary sweetness (more like treacle than caramel this time) and woody spices (think of cinnamon bark or nutmeg). Underneath there are some darker, more bitter notes (imagine dark chocolate and espresso coffee). The finish is surprisingly short but intensely spicy (think of cinnamon again) and quite dry and woody. There is also a hit of raw alcohol, which is a bit unpleasant, but this is soothed a little by the other sherry cask characteristics.

Pittyvaich 12 years old is a strange one. It has all the lovely characteristics that you associate and enjoy from a sherry cask but they are too concentrated and exaggerated, which throws the whole whisky out of balance. The whisky is pleasant enough and it is worth trying if you get the chance, so that you can tick off a rare distillery and taste an example of too much sherry cask influence (for my taste anyway). If you can find a bottle, this should cost £55-60.
posted by Matt C at 11:48 AM

I haven't seen this stuff in quite some time. Any idea where I might find some at a reasonable cost?

I tried this noon and if you ask me what I remember now, the first word comes out is Sherry and it’s also the only one word. Very very very sherry! However, it’s a nice dram in a lonely and quiet night…

To Luke - AspiringGentleman
I am glad that you enjoyed the article. I work in The Whisky Shop in London and we have the Pittyvaich 12 in stock for £59.99. Let me know if you want a bottle and we can post it for an extra £7.50.
Matt

I've got a bottle should I keep hold of it

The bottle is worth around $1300 US Dollars... If you're lucky enough to find one!

I've just found one.. Along with a couple others from the same area. Where are you getting your valuations? Are you buying?