In the whisky cupboard ... Gentleman Jack 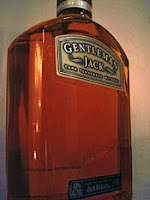 In order to celebrate the 4th of July, American Independence Day, yesterday we decided that it was time to open one of the American whiskies that we have in our whisky cupboard. Gentleman Jack is a whiskey released by the world famous Jack Daniel's distillery that can be found in the town of Lynchburg in the state of Tennessee. It was established in 1866 by a man named Jack Daniel and the distillery remained in Jack's family until 1956 when it was sold to a Kentucky based distilling company called Brown Forman, who remain as the current owners.

Tennessee whiskey is different from bourbon, which is produced in the state of Kentucky. The ingredients are the same but Tennessee whiskey is filtered through charcoal prior to maturation. Jack Daniel pioneered this process. It is lengthy (taking up to 10 days per batch) as the whiskey is dripped through the charcoal, which by law must come from the sugar maple tree. This is done so as to remove unwanted impurities from the distillation process and make the final whiskey cleaner and smoother.

Gentleman Jack is different from the regular Jack Daniel's No.7 as it is filtered twice through the maple charcoal - once before maturation and once after. It is also slightly older at release, being around 5 years of age. Jack Daniel had experimented with double and even triple filtration of his whiskey but the practice was not started commercially until 1988, when Gentleman Jack first went into full scale production. It is a unique whiskey as no other in the world follows this double filtration process.

The colour is a dark golden amber and the nose is aromatic and welcoming. There is a lot of vanilla and also some oaky wood (think of coconut especially). Some other interesting sweeter notes come through well - a distinct sugary aroma (imagine nougat or cream soda), some dried fruits (think of tropical fruits like mango and pineapple, as well as candied orange peel) and some caramel. Something else is also present on the nose that took us a while to pin down (the nearest we got was an aroma something like a waxy furniture polish). On the palate this is light and very smooth, with much more woodiness than on the nose. It has a lovely creamy vanilla quality that is backed up with the complex combination of those dried tropical fruits, candied peel, caramel and something slightly bitter and nutty. It lacks the sweetness that the nose suggests and becomes very dry during its long, lingering finish. An oaky, slightly bitter woodiness and the dried orange peel are the predominant notes.

Gentleman Jack is a good, enjoyable American whiskey that has considerably more structure and complexity than its more famous relative, the Jack Daniel's N0.7. Gentleman Jack is found primarily in the travel retail/Duty Free sector around the world and this is where we purchased our bottle. It cost about £17 for a litre, once converted from the local currency. It can also be found in a few selected whisky retailers in the UK, but prices are higher at £35-40. We say that Gentleman Jack is well worth buying next time that you are travelling.
posted by Matt C at 7:53 PM

I have a bottle with an older looking label. How do I know the year it was bottled?