Have just tried ... The Famous Grouse 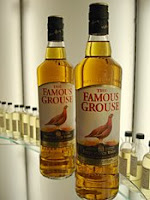 The Famous Grouse is the UK's biggest selling whisky. It is a blend that is made up of single malts from the Glenrothes, Glenturret, Highland Park and Macallan distilleries and some grain whisky. The four distilleries are all owned by the Edrington Group and the success of the blend can be traced back to the 1960s, when whisky sales boomed. In 1980, The Famous Grouse finally overtook Bell's, its long term rival, to gain first place for UK sales and has never looked back. It has maintained first place ever since although the rivalry means that figures are always close. The Famous Grouse accounts for 15% of all blended whisky sales in the UK, which is its primary market.

The Famous Grouse was created by a company called Matthew Gloag & Son. The company was set up in 1800 by Matthew Gloag in the town of Perth and was originally a wine merchant and importer. They supplied wine to Queen Victoria whenever she stayed at Balmoral Castle, as well as other wealthy clients. In 1860, Matthew's son William took over and started buying whiskies from various distilleries around Scotland and blending them, as was the trend at the time. The popularity of his blends grew and in 1896, his son (also called Matthew) launched The Grouse, which later became The Famous Grouse. The name was given so as to attract the sporting type of gentleman who frequented the Highlands in the late Victorian era to go shooting, hunting and fishing. The iconic grouse logo was a pencil drawing by Matthew's daughter and a version of this original drawing is still used on the label today.

The colour is a light amber and the nose is youthful with some caramel, dried fruits (think of raisins or sultanas), woody oaky vanilla and some yeast. There is also plenty of raw spirit, especially at the very beginning, although this fades the longer the whisky is in the glass. Despite the initial spirity quality, the nose is quite light and delicate. On the palate this is slightly richer than the nose suggests with lots of sugary caramel and toffee up front. This is followed by some creamy vanilla, dried fruits (especially raisins), some cereal grains and just a whiff of earthy smoke. Unfortunately, the raw youthful spirit is never far away and it is exposed in a short, crisp finish that offers little else and is therefore slightly disappointing.

The Famous Grouse can get bad press from some whisky afficiandos but it is easy to see why it is so popular and outsells everything else in the UK. It has enough interesting characteristics yet remains uncomplicated and easy drinking. Having never tried it and having only read various contrasting reports, it gave me a pleasant surprise and was certainly better than expected. The Famous Grouse is widely available in nearly all pubs, bars, convenience stores and supermarkets throughout the UK and should cost £13-17 a bottle, which is a decent price for a solid, if unspectacular, whisky.
posted by Matt C at 4:32 PM