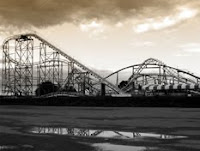 The Rollercoaster is a new whisky release from the innovative Ardbeg distillery on the Scottish island of Islay. Islay is the spiritual home of the world's smoky style of whisky and the Ardbeg distillery forms an important part of the island's history, having been founded in 1815. The release of the Rollercoaster is exclusive to Ardbeg Committee members (you can join by going to www.ardbeg.com, if you haven't already) and is being released to commemorate the 10th anniversary of the Committee being started.

Ardbeg release one or two special bottlings each year for their Committee members and Rollercoaster is the first of this years. The whisky is constructed of a vatting (or mixture) of 10 casks of Ardbeg of differing ages. There is one cask representing each of the 10 years that the Committee has been running. The oldest whisky included is from 1997, then 1998, 1999 and so on until you get to the youngest whisky which is just three years old (the minimum legal age for Scotch whisky) and was distilled in 2006. Most of the casks are ex-bourbon but a couple are ex-sherry, so the results should be very interesting! It will be bottled at 57.3% ABV, will cost £50 and will only be available exclusively to Ardbeg Committee members through www.ardbeg.com. The release date is Monday 15 February.

Rollercoaster may seem a strange name for a whisky but it fits perfectly with the modern outlook of Ardbeg as a distillery. Take one look at their innovative website and you will see that it is different from most other distilleries. They combine strong traditions with this innovation and this allows them to combine the two elements in their range. As a result you have whiskies with Gaelic inspired names such as Airigh Nam Beist, Corryvreckan and Uigeadail alongside the Supernova and this new Rollercoaster. As yet, there are no tasting notes on any blogs or websites but these should soon start to appear as samples and bottles get opened by the lucky few. We will be posting our tasting notes as soon as possible. We can't wait!
posted by Matt C at 10:35 AM

nice. on my shopping list.
here's our version of it : http://bit.ly/b1gyQV