Ailsa Bay (pronounced ale-sa bay) is one of Scotland's newest single malt whisky distilleries. It is located on the outskirts of the town of Girvan, which lies on the west coast of the Lowland region, and production started in 2007. The distillery was constructed and is operated by William Grant & Sons, who also own the Glenfiddich and Balvenie single malt distilleries. Ailsa Bay is found on the site of Grant's massive Girvan grain distillery and the total complex covers 380 acres. The majority of the single malt spirit produced at Ailsa Bay is to be used in the Grant's range of blended whiskies, which are among the best selling in the world.

The name of the distillery is taken from the nearby Ailsa Bay, upon which the town of Girvan sits. The setting of the distillery is spectacular, especially on the day of our visit when we had clear blue skies. The rolling hills rise steeply behind the distillery and it looks out over the bay to the isles of Arran and Ailsa Craig - the tiny yet fascinating dome shaped island that is made of some of the hardest granite on the planet (they use this form of granite to make the stones used in the winter sport of curling). We could even see the northern coast of Northern Ireland away in the distance. 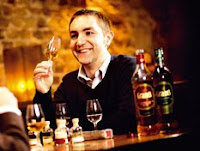 Our visit of Ailsa Bay was taken by Ludo Ducrocq (pictured, left) who is the global ambassador for the Grant's range of blended whiskies. The distillery is not open to the public and little information seems to have been written about it since its launch in 2007. We discovered from Ludo that we were the first whisky bloggers to be formally shown around the facility, so suddenly felt very privileged and slightly under pressure! We thank Ludo for the opportunity to look around, his time and the information supplied to us during the visit.

The tour begins with a brisk walk from the Grant's offices to the Ailsa Bay site. The distillery is housed in a former outbuilding and as we enter there is a time line of the construction to greet us. The construction of the distillery took place in record time and just nine months after work began in January 2007, the first spirit was flowing. Ludo explained that Ailsa Bay was built to produce single malt whisky in order to help meet the increasing demand for the Grant's range of blended whiskies. As a consequence, this will also free up more Glenfiddich and Balvenie whisky for the expanding single malt market. It was also built to be one of the most eco-friendly distilleries in Scotland, with much of its energy recycled and used through the system again.

We move upstairs to the production area and first go through an operation area, where distillery workers and stillmen monitor the progress of each stage of the distilling process by computer. Next is the stainless steel mash tun, which is the vessel where the soluble sugars from the malted barley are dissolved in warm water. This is massive and allows you to see in via narrow windows in the side and a port hole-like door at the top. Through this top door, we saw the steaming mash being stirred and mixed by huge blades and the side windows showed the grains swirling around in the thick sugary liquid. 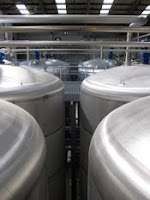 Directly opposite the mash tun are a series of large stainless steel fermentation tanks (pictured, left), where yeast is added and turns the sugar in the mash liquid to alcohol. The final liquid is called wash and each tank is at a different stage of the fermentation process in order to provide a constant source of this alcoholic wash for the stills. The fermentation lasts for approximately 50 hours and when finished, the wash has an alcoholic strength of roughly 8% ABV, similar to that of a strong ale. The sight and scale of the operation is impressive, especially when standing on the viewing platform and looking down as in the photo. 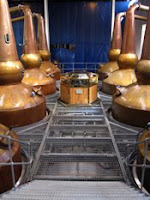 The still room at Ailsa Bay is also an impressive site. It houses eight copper stills (four wash stills and four spirit stills) and these are producing six million litres of single malt whisky each year, making it one of Scotland's largest. The stills are replicas of those found at Balvenie in Speyside, another of Grant's distilleries. They did this in order to produce the fruity single malt of decent body that they require for the Grant's blends. Each still has a condenser attached to the lyne arm and this turns the spirit vapours back to a liquid in a quick and efficient way. All the condensers are again made from copper, as this cleanses and pulls impurities from the spirit - there is one exception, which is a condenser made from a metal alloy as Grant's experiment with how this will effect the flavour of the spirit produced. Another striking and unique feature of the still room is the octagonal spirit safe (the vessel that collects the spirits) and this is positioned in the centre of the eight stills, as pictured above.

As mentioned, the single malt spirit produced at Ailsa Bay is destined for the Grant's range of blended whiskies. There are no official bottlings of Ailsa Bay whisky on the market as yet, as the distillery has been producing and maturing spirit for less than the legal three years. It will be interesting to see if there are any releases in the pipeline, but from what Ludo said then don't hold your breath! Ailsa Bay is currently producing three styles of whisky - a light, fresh one, a heavier, richer one and a small amount of a peaty one. 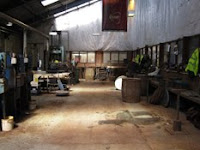 The final part of our tour takes us to the cooperage which is located on the same site as the Ailsa Bay and Girvan distilleries. The cooperage is where the casks for maturation are constructed and Girvan has seven full time coopers and numerous other part time staff who carry out various associated jobs. A cooperage is a rare sight at a distillery, as most casks are constructed by external companies, so the chance to see one in action was a real treat. 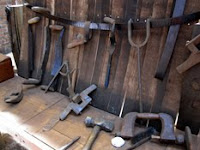 We enter the workshop area and have to put on our safety glasses and earplugs (in addition to our high visibility vests, this makes us look particularly trendy!). Ludo explained that the casks arrive at the cooperage, are checked and any faulty staves (the long strips of wood that make up a cask) or signs of leakage are replaced and repaired. Girvan uses casks that have been previously used in both the sherry and bourbon industries. A cask is held together by natural tension and a series of metal hoops - there is no glue, nails or sealant. The cask heads are sealed using dried, toughened thin reeds which are hammered in to the narrow space between the head and the top of the staves. They also strip and char the insides of the casks in a kiln-like structure and this promotes interaction between the cask and the spirit which is eventually filled in side, giving the required flavours.

The visit to Ailsa Bay distillery was fascinating. Firstly, because little is known about it outside of William Grant & Sons' organisation - we thank Ludo again for his invite, his time and also for giving us an insight in to what is going on at the core of such a large company and what makes it tick. Secondly, Ailsa Bay has many points of interest that are not commonly seen on a regular distillery tour - its contemporary construction, its unique still room and the fact that they have a cooperage on the same site. We moved on to visit the neighbouring Girvan distillery, which is one of Scotland's largest grain whisky distilleries - the review of that visit will appear shortly ...

If you wish to ask Ludo any questions about the Ailsa Bay or Girvan distilleries or the Grant's whisky range, then he can be contacted through his Grant's Whisky Blog.
posted by Matt C at 1:07 PM

Looks like a blast. When in doubt go straight to the source!

Doing some research on Ailsa Bay for an upcoming tasting of Grant's Sherry Cask whisky. This is great information. Thank you.

Hi, do I need to book the tour?