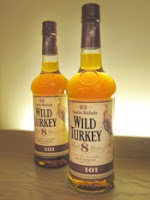 What's with the name?
Wild Turkey is an American whiskey that is produced in the town of Lawrenceburg, Kentucky. The distillery is one of seven in the state of Kentucky and produces an extensive range of whiskies. The name is said to be derived from a story regarding a former distillery worker called Thomas McCarthy. He used to go on an annual wild turkey hunt with friends and in 1940, he took some whiskey from the distillery with him. They enjoyed it so much that the following year they asked him to bring some more of "that wild turkey whiskey". McCarthy liked the name and soon after the Wild Turkey brand was introduced.

A long and proud history
However, the name could also come from the fact that the original distillery founded by the Ripy family in 1869, was built on Wild Turkey Hill. The Ripy family quickly gained recognition for the high quality of their bourbon and this culminated in it being selected to represent the state of Kentucky at The World Fair in 1893. As with all American distilleries, the Ripy distillery was forced to close during the Prohibition period between 1920 and 1933. The distillery was modernised and was one of the first to re-open for production when Prohibition was lifted. It was taken over by Austin Nichols, a company that began in 1855 trading tea, coffee and liquor, in the early 1970s and later became part of the massive Pernod Ricard group. This helped to establish Wild Turkey as a strong export brand internationally. Wild Turkey is currently owned by another large drinks corporation, the Campari Group, who took control in 2009.

Locally sourced ingredients
This Wild Turkey eight years old is America's best selling premium aged bourbon. It has an alcoholic strength of 50.5% ABV (101 Proof using the old US system - a name which it can also be found by) and costs around £25-30 a bottle in the UK. The ingredients used to make the whiskey are grains (primarily corn grown in Kentucky, mixed with barley and rye), water which is taken from a limestone well within the distillery and yeast - this is a secret formula and is cultivated at the distillery. The whiskey is aged in new white oak casks, which are heavily charred so as to add additional flavour, for a minimum of eight years.

Our tasting notes
The colour of this Wild Turkey eight years old is golden amber and the nose is packed with expressive characteristics. There is immediate and obvious cereal grain and this is followed by some sweeter aromas such as dried fruits (think of raisins and candied orange peel), vanilla and coconut. The nose feels prickly with alcohol and has distinct notes of burnt sugar and toasted almonds coming through. On the palate, this feels thick in the mouth and again has a complex, yet well balanced mixture of notes present. It is very grainy (especially reminiscent of the more bitter types of grain, like rye) with plenty of wood spice (imagine cinnamon, ginger and nutmeg) and that distinct toasted almond and burnt sugar again. There is also some peppery heat. Sweeter elements begin to balance out these spicier, bitter notes and these include sweet honey, vanilla, coconut and orange. The finish is punchy and long, with a fresh, zingy combination of orange zest, ginger, oak and that pepper-like heat. The finish becomes more woody with time and gets drier and drier, leaving your mouth gasping and wanting more!

What's the verdict?
This is a lovely example of an American bourbon. It has great balance between the sweeter and spicier elements and is easy drinking, despite its high alcohol content. We recommend drinking it without water, as when water is added the spiciness and heat are flattened out and the bitter woody notes take over. The balance seems to be taken away. However, it may be too dry or spicy for some, especially whisky beginners or those new to bourbon, so adding water is an option here. A must try whiskey and one that is a decent price for the high quality.
posted by Matt C at 1:53 PM