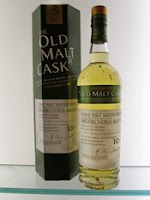 An independent single cask bottling
Director's Tactical Selection is a single malt whisky released by the independent bottling company Douglas Laing & Co. They are based in Glasgow and the company that was set up by Frederick Douglas Laing in 1948. They are one of the largest independent bottlers in Scotland and is currently run by Frederick's two sons, Stewart and Fred Junior. Distilleries from all areas of Scotland fill whisky directly to Douglas Laing’s own casks and these are matured and then released or blended at the appropriate time. This whisky is part of the Old Malt Cask range, which are all bottlings released at 50% ABV and specially selected from single casks. This limits the numbers of each release and increases the retail price and in this case, there are only 354 bottles available and each should cost £60-70.

So, which distillery is it from?
Director's Tactical is not a distillery name, but one given to it by Douglas Laing & Co. Most distilleries allow the independent bottling companies to use their name, however some do not so an alternative name has to be given. This is the case here. it is not as difficult as you think to guess these distilleries, especially once you look at the label on the bottle. This is named as 'A Skye malt' and there is only only distillery on the isle of Skye, so therefore it must be from it. That distillery is Talisker.

Remote yet popular
Talisker is an iconic Scottish whisky distillery on the isle of Skye. The island lies off the north west Highland coast and forms part of the Hebrides. As mentioned, the distillery is the only one on the island and is located close to the village of Carbost, in the shadow of the imposing Cuillin hills. Despite its remote location, the distillery is one of the most visited in Scotland. Talisker was founded in 1830 by two local brothers, Hugh and Kenneth MacAskill, and has a current annual production capacity of 1.9 million litres. The distillery is currently owned by drinks giant Diageo and its sales are increasing rapidly, mostly thanks to the popular Talisker 10 years old.

Our tasting notes
The colour of this Director's Tactical Selection Old Malt Cask 10 years old (possibly, one of the longest names for a whisky so far!) is pale and golden, almost straw-like. The nose is fresh, vibrant and fragrant with plenty of vanilla, sweet honey, dried grasses and bitter cereal grains (imagine the husks especially). Through these aromas comes some lovely sweet, earthy peat and a touch of salty sea water. This nose makes you want to try the whisky. On the palate, this is again fresh and feels light and thin in the mouth. However, it makes up for this slight disappointment with plenty of vibrant flavours - lots of sweet grain, vanilla and peat (think of damp earth or moss) to begin with and then warm spices (imagine peppercorns or chilli), honey, brine and a hint of bitter iodine. The finish becomes very hot and spicy (the peppercorns and chilli again) with the salty note, honey and sweet peatiness fighting their way through to give decent length. The finish burns away for a long time getting drier and drier with a hit of that bitter iodine to end.

What's the verdict?
This is a good but slightly challenging whisky. Fans of the regular distillery release of Talisker 10 years old may be disappointed as it does not have the richness or peatiness of that. This is fresher, more vibrancy, more spicy heat and is stronger in alcohol. The casking is different and the one used has imparted more subtle characters to the whisky, but this makes it a different drink. The higher ABV calls for the addition of water but this brings out a distinct cereal grassiness and something slightly acidic and unpleasant - we recommend sticking to drink it neat. The price is also double that of the regular 10 years old. It's a lovely refreshing peaty whisky but is it worth the money?
posted by Matt C at 11:01 AM