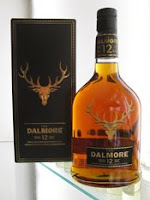 Indian owners
The Dalmore distillery is located in the town of Alness in the northern Highlands of Scotland. It was founded in 1839 by Alexander Matheson and has been owned by the current owners, Whyte & Mackay, since the 1960s. Whyte & Mackay are now part of a larger Indian owned company called United Spirits, who also own the Jura, Fettercairn and Tamnavulin distilleries in Scotland. The capacity of Dalmore in 4.2 million litres per year, although recently the average has been approximately three million per year as they consistently have water shortage problems during the warmer summer months.

A classic sherried whisky
The whisky produced at Dalmore is shared between the single malt market, as well as contributing to the popular Whyte & Mackay blended range of whiskies. Dalmore single malt sales have increased rapidly in the last five years since they have re-branded and expanded their range. The core range currently includes this 12 years old, a 15, 18 and 40 years old. In addition to this, Dalmore also release a number of limited editions such as the recent MacKenzie and Sirius. The distillery is well renowned for their use of sherry casks during the maturation process and the whiskies pick up prizes and awards around the globe.

Our tasting notes
The colour of this 12 years old is dark golden amber with a chocolate brown tint. The nose is rich, fragrant and promising with plenty of classic sherry cask maturation characteristics - dark dried fruits (imagine raisins, sultanas and cherries), caramel (almost treacle), wood spices (think of cinnamon and nutmeg). In addition, there are also some distinct orange (this is zesty and reminiscent of marmalade), coffee and cocoa aromas. On the palate, this feels creamy and thick with an initial mix of zingy citrus zest (that orange again) and sweet honey and caramel. This gives way to plenty of dried fruits (especially the raisins) and the coffee/cocoa note (think of those creamy hard boiled coffee sweets). The high level of sweetness is balanced a little by the evidence of some wood spice (cinnamon and nutmeg) and a drying oakiness. The overall combination of elements on the nose and palate is very reminiscent of a spiced fruit cake. The finish is disappointingly short, with some raw spirit taking over the initial pleasant sweetness and fruitiness.

What's the verdict?
Dalmore 12 years old is a pleasant whisky and a good example of a sherry cask matured whisky in the 10-15 years category. It has plenty of sweetness, spiciness and fruitiness on the nose and palate but the finish seems to let it down slightly (otherwise, it would have the potential to be a great dram). This would be a good whisky to introduce a beginner to the concept and flavours of sherry cask maturation and also for those with a bit of a sweet tooth. A decent after dinner whisky that would also lend itself to sharing with a cigar. A bottle should cost around £30.
posted by Matt C at 4:08 PM

Dalmore is a solid sherry dram.
i love the 15 year old especially.