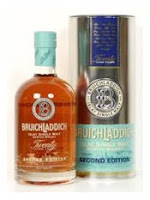 Bruichladdich (pronounced brook-laddie) is located on the western peninsula of the famous whisky island of Islay and sits on the shores of Loch Indaal. Islay is the traditional home of the world's smoky whiskies but the Bruichladdich distillery style is in contrast to these, being lighter, fresher and generally with little or no peatiness. The distillery was originally founded in 1881 - it was built using stones from the local beach and was one of the first buildings in the UK to be constructed using concrete! It is a small distillery with an annual production capacity of just 700,000 litres. Bruichladdich translates as 'the brae (hillside) by the shore' from Gaelic.

Innovative yet traditional
Bruichladdich is one of Scotland's most innovative distilleries and one of very few that remain independently owned. It was taken over by the Bruichladdich Distillery Company - a group of four entrepreneurs - in 2000 and they have given Bruichladdich's whisky production and release programme an experimental edge. They have become renowned for maturing their whisky in non traditional casks, such as those used for wine and dessert wine. The innovative range is big and always updated with new releases. In contrast to this, the new owners renovated the distillery to its former glory and decided to maintain the traditional whisky making machinery and techniques. There are no computers used for production and it is one of the most traditional and historical distilleries in Scotland.

More stability
On occasion, the Bruichladdich release programme seems difficult for consumers to keep track of. Different ages of whisky are released from different casks and the list is now extensive. The good news for consumers is that the distillery have now announced that they will continue to experiment but that the core range will remain more stable. This Flirtation was produced under the previous ownership and has undergone maturation in ex-bourbon casks for 20 years, followed by six months in Mourvèdre red wine casks from the Languedoc region of southern France. It is released at 46% ABV and should cost around £70, if you can find a bottle.

Our tasting notes
The colour is golden amber and the nose is rich and initially sweet. There is plenty of immediate caramel, honey and fruits. This fruit is a mix of dried fruits (think of sultanas and prunes especially) and stewed or cooked apples. Mingling with these are other notes which give the nose a slightly bitter edge - some distinct cereals, plenty of wood spice (imagine cinnamon and nutmeg) and a hint of damp soil. On the palate, this starts sweet and silky, before becoming drier, spicier and noticeably tannic. The sweetness is again led by caramel and honey, with plenty of the dried and stewed fruit notes present (think of the sultanas, prunes and apple again, plus stewed plums and a hint of orange zest). Then come the drier and spicier notes. These give the palate a slightly bitter edge and include some cereal grains, dried grass, plenty of spices (imagine cinnamon, nutmeg and ginger) and distinct oak. The overall feeling is slightly oppressive and heavy. The finish is dry and spicy, with a lasting prickly heat. The tannins from the red wine cask are most evident here and they give it extra dryness, meaning that the whisky quickly becomes very woody and oaky.

What's the verdict?
This whisky is another interesting experiment from Bruichladdich. Many people enjoy Bruichladdich for its lightness and freshness but this original delicacy is only hinted at here. The extra age and the red wine cask have beefed it up significantly. Mourvèdre is a rich, tannic, intense and dry style of red wine and these characteristics battle with the lighter elements of the whisky. Someone who was tasting with us described this whisky as being like a lithe athlete being bulked up with steroids. Some of the red wine cask finished whiskies are better than others and while this is interesting to try and a decent example, there are other younger ones which seem to offer more balance and value for money.
posted by Matt C at 1:01 PM