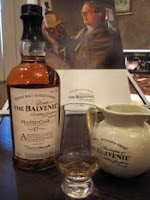 Last night we were lucky enough to be invited to the unveiling of a new release from the Balvenie distillery. This was held in the function room of The Old Queen's Head pub in Islington, London by the Balvenie's UK brand ambassador, Andrew Forrester. Here he presented the Balvenie 17 years old Peated Cask to his intrigued audience. "A peated, smoky Balvenie?", was the whisper around the room. It turns out that we were some of the first people to sample it, outside of William Grant & Sons (Balvenie's owners). An allocation of 3000 bottles will be released in the first week of September in the UK, with a further 3000 bottles distributed worldwide later in the month. The RRP (recommended retail price) will be £70 and the bottling strength is 43% ABV.

The 'complete' distillery
Balvenie is one of the most famous names in the world of whisky. It was founded in 1892 by William Grant, who wanted to build a new distillery in the Speyside region so as to help his other distillery at Glenfiddich to meet increasing consumer demand. Glenfiddich had opened six years earlier and its whisky was proving extremely popular, so Grant decided to renovate nearby Balvenie House and its outbuildings. Balvenie is a large distillery capable of producing over 5.5 million litres of spirit a year and is described as 'the complete distillery', due to the fact that every process of production takes place on the site. This includes growing some of the barley on land adjoining the distillery buildings (the only distillery to do this), having an active malting floor and making casks in their own cooperage. Balvenie has been one of the world's best selling single malt whiskies for a number of years and consistently remains in the top 10.

For further information on the Balvenie distillery, please visit the distillery profile page on our website www.whiskyforeveryone.com.

A peaty Balvenie?
Balvenie is not known for its peaty, smoky whiskies. They do actually use a small amount of peat in the malt drying process but the flavour is rarely detectable in their final whisky. Therefore, this makes this whisky particularly intriguing - the story is as follows. The Balvenie's legendary Master Distiller, David Stewart, is one of the whisky industry's true innovators and he is widely regarded as having pioneered the use of different casks for finishing. In 2001, he produced some heavily peated Balvenie whisky and put this in to ex-bourbon casks. In late 2009, after eight years of maturation, he decided to transfer this heavily peated whisky to some fresher casks and had planned to experiment and put some other suitable whisky in to the old casks. Stewart selected some 17 years old and transferred it to the casks that had previously held the heavily peated whisky and monitored its maturation progress. The result was then blended with some other 17 years old whisky that had been part matured in new American oak casks. The result is this Balvenie 17 years old Peated Cask.

Our tasting notes
The colour is golden yellow and the nose is interesting. There is initial sweetness (think of caramel and honey), distinct cereal grains and some dried fruits (imagine raisins, sultanas, orange peel and apricots). Through this comes a whiff of light, earthy peat smoke that hints at bitterness. Finally there is a hit of wood spice, especially cinnamon, nutmeg and liquorice. It's a promising start. On the palate, after an initial dash of fresh citrus-like zestiness (more like lemon than the oranges of the nose), a complex mix of elements combine to give you plenty to think about. There is a more obvious smokiness that the nose suggested and this is earthy, with a hint of bonfire ash. Sweet caramel, honey, dried fruits (the raisins, sultanas and apricots again) and some cooked/stewed fruits (especially apples) give a lovely rich, rounded sweetness that is counteracted by the cereal and spice notes (think of ginger, cinnamon, nutmeg and a touch of clove). The finish is decent in length with honey and dried fruit sweetness becoming drier and spicier, with the earthy smokiness never far away. The addition of water slightly flattens the zesty and bitter notes, while making the peatiness a little sweeter.

What's the verdict?
Well, we certainly didn't see this one coming when we got that invite! This is an interesting whisky that is well made with plenty of character. Are Balvenie taking a risk with this peaty, smoky whisky? Probably not, as the smokiness is light and subtle, probably due to that characteristic coming from the cask rather than the traditional peated malt. Also, Balvenie has a big worldwide following who will want to try this, so it should be a success. What is intriguing is to remember that there is still that original heavily peated Balvenie sitting in their warehouses somewhere. When will they release that? Now, there is something else that we would love to try!
posted by Matt C at 2:15 PM