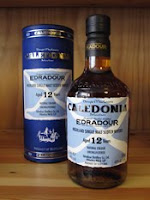 A King's dram?
Edradour is marketed as Scotland's smallest single malt whisky distillery and produces just 90,000 litres of whisky each year. Technically, it is no longer the smallest as new distilleries, such as Kilchoman on Islay and Abhainn Dearg on the isle of Lewis, have opened and are producing less spirit per annum. Having said that, Edradour is the only one that produces a core range of bottlings to the market, so they can hang on to the tag for a while longer maybe! Edradour is located in the central Highlands, close to the town of Pitlochry, and is owned by the independent bottling company Signatory Vintage, who took control in 2002. The name of Edradour is thought to derive from the Gaelic 'Edred dobhar' meaning 'the stream of King Edred'.

Traditional methods
Edradour is housed in its original farm buildings and little has changed since it was founded in 1825. Everything at Edradour is small with all the distilling equipment (a mash tun, two washbacks and a pair of oddly shaped stills) jammed into one room. All processes use traditional methods with no automation and much of the equipment is made from wood. The pair of stills are also the smallest size permitted for commercial distilling by the Customs & Excise department. The picturesque farm buildings and the 'smallest' tag help the distillery to be one of Scotland's most visited, attracting approximately 100,000 tourists per year. The single malt core range is small and based around the 10 years old, with more limited expressions (such as this Caledonia) also available as cask strength or with experimental cask finishes.

Details of the Caledonia
This whisky was selected by the owner of Signatory Vintage (Edradour's owners) Andrew Symington and songwriter/poet Dougie MacLean. It is named after MacLean's well known song Caledonia, which he wrote in 1977. The bottling is limited and was released to commemorate Homecoming Scotland in 2009, an event that celebrated the 250th anniversary of the birth of Scottish national icon Robert Burns. It has been matured for 12 years in an ex-Oloroso sherry cask, is bottled at 46% ABV and can be found in specialist whisky retailers for around £40 a bottle.

Our tasting notes
The colour of this Caledonia is a golden caramel with a dull brown tinge. The nose is initially appealing with some pleasant sweet notes present - dried fruits (think of raisin, sultanas and candied orange peel), vanilla, caramel (although this becomes more treacle-like and a little bitter with time), toasted nuts (especially almonds) and cereal grains. However, a slightly acidic sharpness develops quickly and this catches in your nostrils to give a slight unpleasant feeling. The sharpness is hard to pinpoint what it reminded us of. On the palate, this is prickly and sharp to begin with, before an interesting combination of notes battle through. These include raisins, caramel, vanilla, butterscotch and some wood spices (think of cinnamon and nutmeg). It then dramatically turns bitter, very woody and citric with dried grass, cereal husks, dry oak and bitter orange peel appearing. Some burnt sugar comes through right at the end. The finish follows a similar pattern to the nose and palate - it starts pleasantly sweet (imagine toffee and raisins especially) before becoming very dry, spicy and tangy (the oak, wood spices and bitter orange again).

What's the verdict?
This is a strange whisky. It must be said that it starts off very pleasantly but then the bitter, drying elements appear and make it ultimately disappointing. Why? Firstly, it feels very thin on the palate for a sherry cask matured whisky, which you would expect to be more sumptuous and velvety. Secondly, the bitterness/dryness/acidity is a surprise as Oloroso is a sweet style of sherry that is high in natural sugars and you would expect a whisky matured in it to be softer, sweeter and smoother. Thirdly, it really doesn't finish well and leaves your mouth very dry, parched almost. Ultimately, these elements lead to it seeming unbalanced.
posted by Matt C at 11:17 AM

Oloroso is actually a dry style of Sherry. Otherwise a great write up.