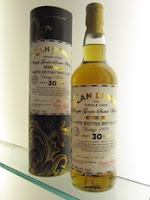 One of Scotland's largest bottlers
This whisky is released by the Glasgow based independent bottling company Douglas Laing & Co, under their Clan Denny name. This name is used for their ranges of single grain whiskies and a series of vatted malts. The origin of the Clan Denny name is a little hazy, although Douglas Laing tell the story of a Taiwanese businessman who wanted a blended whisky made by them and named after himself. His name was Dennis and he suggested 'MacDennis', which Douglas Laing persuaded him to change to 'Clan Dennis'. Over time this has been adapted to Clan Denny. Douglas Laing & Co were founded in 1948 and are one of Scotland's largest independent whisky bottlers.

Popular for blends
North British is a large distillery that produces single grain whisky, using 100% maize, for a multitude of blended whisky brands. These include heavyweights such as Johnnie Walker Black Label, Chivas Regal, The Famous Grouse, Cutty Sark and J&B Rare. No official distillery bottlings of their whisky exist and the only way to try them is through independent bottling company stock, such as this one from Douglas Laing & Co. Even then, North British whisky is extremely hard to find. This whisky was distilled in 1979 and is bottled at 30 years of age. It has been matured in a single sherry cask and is released at the natural cask strength of 54.2% ABV. A bottle should cost £80-85 from specialist whisky retailers.

Edinburgh's only distillery
The North British distillery was founded in 1885 by three independent blenders - Andrew Usher, Willy Sanderson and John Crabble - who decided to build it in order to produce a constant source of grain whisky for their own ranges of blended whiskies. It is located in Edinburgh and is the last remaining whisky distillery within the city's boundary. North British has been owned by Lothian Distillers since 1993 and is one of Scotland's largest grain whisky production facilities. The current capacity is around 60 million litres per year and the whisky is made by three column stills that are operated 24 hours a day. This design of still is sometimes called a Coffey still and is named after Irishman Aeneas Coffey, who patented its design in 1831.

Our tasting notes
The colour of this North British 30 years old is dark gold with a tint of brown. The nose is intense and packed full of cereal grains (think of a slightly bitter type of grain like rye). There is also plenty of distinct caramel and toffee, along with some dried fruits (especially raisin and orange peel) and heavy wood spices (imagine cinnamon and nutmeg). As the whisky sits in the glass for longer, the whiff of a burnt/charred aroma starts to come through - this is reminiscent of a cross between burnt sugar or treacle and sulphuric matchstick smoke. On the palate, much of the nose is replicated. The whisky is heavy and intense with a ton of cereal grain, woody oak and spice flavours present. These threaten to overpower everything else, although some sweeter elements (especially some dried fruits and zesty orange) manage to get through. The burnt/charred note again appears and increases with time to give a distinct bitter edge. This whisky seems to be much stronger in alcohol than its 54.2% ABV (and that's already strong!), and the prickly heat from the alcohol is evident. The finish begins sweetly (think of caramel), before being overtaken by bitter grains and that sulphuric charred woody note.

What's the verdict?
It is always good to try a whisky from a distillery that you have never previously tried. Grain whiskies are known to be intense with a bitter edge and this North British certainly demonstrates this, only more exaggerated due to its increased age. As a result, its intensity, grainy bitterness, spiciness and dry woody finish make it more of an acquired taste and not particularly user friendly. However, with the addition of water (and it can take a lot of water!), it becomes more accessible, sweeter and softer on the nose and palate but the grains and burnt/charred/sulphuric notes are still in the background. An interesting dram to try but you would have to be a real grain whisky fan to love this.
posted by Matt C at 4:50 PM