Have just tried - The Tweeddale Blend (Batch No.2) 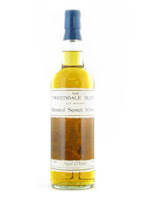 The Tweeddale Blend is a whisky created by Stonedean Limited. The company was established by Alasdair Day, who is currently the director, in January 2009 and his aim was to resurrect an old blended whisky recipe that was last produced over 70 years ago. This was named The Tweeddale Blend and was originally produced by Alasdair's great grandfather Richard Day, a licensed grocer from Edinburgh in the 1920s.  The recipe for the blend dates back even further to the 1820s when previous owners of the shop, J&A Davidson, started producing their own range of blended whiskies as many such businesses were doing at the time.

Production continued until the outbreak of World War II but was not to be created again until Alasdair gained possession of a family heirloom - a book containing the recipe for The Tweeddale Blend. This included an itinerary the names of the single malts and grain whiskies involved, the type of casks that they were matured in and the quantities of each. Inspired by this, Alasdair set about recreating The Tweeddale Blend as closely as possible to how his great grandfather had produced it. The first batch, released in 2010, gained widespread acclaim within the whisky world (including from us), so we were excited to try the second batch at a whisky festival back in the Autumn.

The second batch again follows the same traditional blend recipe of Alasdair's great grandfather. The exact recipe remains a secret but it is known that the Tweeddale has a single malt content of 50%, with the other 50% being grain whisky. This single malt percentage is high than many blends, which will generally contain anything between 10-40% as single malt. The minimum age of whiskies included has increased from 10 to 12 years of age and just nine single casks of whisky have been used - one single grain and eight single malts. The single grain whisky is the same as that used in Batch No.1, but is now older at 15 years old. The single malts range from 12 to 21 years of age.

The Tweeddale Blend is bottled at 46% ABV and can be purchased from selected specialist retailers - a list of these can be found on Stonedean's website www.stonedean.co.uk.

Our tasting notes
The colour is golden yellow and the nose has a lovely mix of pleasant, clean aromas. Initially there is a hit of cereal grains and these are quickly joined by sweeter notes of toffee, honey and vanilla. Then comes some fruitiness, which combines stewed fruits (especially apple and pear) with dried fruits, such as sultanas. With time some prominent wood spice aromas (imagine white oak, coconut and nutmeg) appear and take hold, as does a faint hint of peat smoke. On the palate, this is distinctly malty and packed with cereals grain characteristics to begin with. These grip on to your taste buds and then begin to combine with some developing sweeter elements. This sweetness has a lovely mix of soft brown sugar, dried fruits (think of sultanas and raisins), honey, toffee and vanilla notes. With time, the wood spices from the nose appear (add cinnamon bark to them) and these add further depth, complexity and dryness to this very good blend. A hint of earthy peat smoke adds a final savoury twist. The finish is decently long and complex beginning with the sweet honey, sultana and toffee notes, before becoming much drier with spice, a whiff of smoke and bittersweet cereals coming through and hanging around.

What's the verdict?
The Tweeddale Blend is very pleasant and positively gripping in flavour, while being soft and easy drinking. It avoids the youthful harsh notes that can affect some blended whiskies and this is due to the increased age of all the whiskies included. The qualities of these whiskies show through in the final dram and create excellent depth, complexity and character. Batch No.2 should enhance Alasdair's and Tweeddale's reputation even further and we think he has done his great grandfather proud yet again. To read our thoughts on Batch No.1 - click here.
posted by Whisky For Everyone at 7:30 AM