Over the last few months we have received a series of packages containing whisky samples from Wemyss Malts. As a result of various circumstances, we have not been able to review and taste them ... until now.  We have decided to put all of these samples together and review them in one week - our very own Wemyss Malts Week.  This will be a four-part series which showcases some whiskies from the companies ever expanding range.

Wemyss Malts is a Scottish based company which specialises in hand crafted whiskies.  It forms part of the larger Wemyss brand, which includes Darnley's View gin and two wine brands - Fonty's Pool from Western Australia and Rimauresq from Provence, France.  All are owned by the Wemyss family (pronounced weems), whose base is Wemyss Castle in Fife.  The castle overlooks the famous Firth of Forth estuary and has been the family home since 1421 when it was constructed by Sir John Wemyss.

The Wemyss family have traditional ties to the whisky industry and these remain, as barley grown on their estate is still used by leading distillery companies.  The ties date back to the beginning of the 18th century when the family allowed a tenant called John Haig to build his first distillery on some of their land.  His whisky, called Haig's, proved to be very popular and remains a best seller today.

The range of Wemyss Malts are all hand crafted and designed to make things easier and more accessible for the consumer.  The are split in to two categories - blended malts and single cask malts - and each release is given a name relating to its flavour profile, rather than the distillery of origin.  This is to help with the consumer recognising what the whisky will taste like and selecting one through their personal preferences.

The whiskies are all from casks which are hand selected by the family under the guidance of whisky legend Charles Maclean.  The blended malt range are all bottled at 40% ABV and appear at age points of five, eight and 12 years.  The single cask malts are of a variety of ages, are all taken from premium single casks within the Wemyss collection and bottled at 46% ABV.  For further information about Wemyss Malts, their range and to purchase - visit www.wemyssmalts.com. 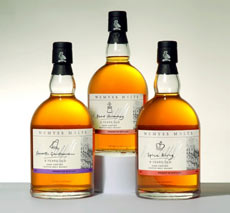 We kick off our Wemyss Malts Week with three offerings from the eight years old blended malts range (pictured, above).  Each of these contains just single malts whiskies, with up to 16 blended together in some cases, and each has a definitive flavour style which lends its name to each blend.  The minimum age of any whisky included is eight years old. Once selected and blended, each of the new whisky combinations are left to marry together for a number of months to give the most integrated flavour profile possible. All are £29 for a bottle.

The Smooth Gentleman - 8 years old
The colour is golden yellow and the majority of the malts in this are from the Speyside region. The nose has a decent and sweet scent that includes aromas of caramel, dried fruits (think of raisins and sultanas), malty cereals and a hint of spiced orange.  It seems youthful with some vibrant spirit showing through.  Underneath are some aromas of honey and cinnamon bark.  On the palate, this has initial notes of malted barley and bitter orange.  The sweeter honey, caramel and dried fruit notes fight through once the youthful spirit settles down and this leads to a pleasant and refreshing end to the palate and finish.  There is also a hint of faint tobacco-like smoke present. The finish is initially sweet with plenty of caramel present. It becomes drier towards the end, with some good wood spice notes finish things off. Slightly disappointing and not particularly 'smooth' to our palates.

The Spice King - 8 years old
The colour is golden yellow with a hint of amber and most of the malts included are from the Highlands and islands of Scotland. The nose is vibrant and the 'spice' in the name is present in the form of an interesting peppery note. There are also aromas of golden syrup, light earthy peat smoke, caramel, fresh orange zest and sultanas. On the palate, the peat smoke is more evident and is the first element to hit the taste buds. Then comes the spicy peppery note followed by some sweetness which adds balance, depth and complexity.  The sweet notes include honey, brown sugar, caramel and dried fruits.  A twist of bittersweet orange zest creates further interest.  The finish is quite long and enjoyable with the damp earthy peat smoke and some bittersweet cereals lingering for ages. This is a lovely whisky that offers plenty on all levels, although it seems more smoky than 'spicy'. Delicious and a very well constructed whisky.

The Peat Chimney - 8 years old
The colour is golden yellow and the majority of the whiskies present are from the famous whisky island of Islay. The nose is vibrant and a little feisty with plenty of peppery, almost chilli-like peat smoke. Underneath are aromas of sweet honey, vanilla, green fruit (maybe some apple?) wet moss, heavy malted cereal grains and some dried grass.  Considering the strength of characterful aromas, this comes across as being quite light and heady. It's all very promising.  On the palate, there is a lovely initial mix of sugary (almost icing sugar-like) sweetness and burning damp peat smoke. Some honey, vanilla and oatcake notes add depth and the combination works very well.  The sweet honey continues to build with time. Towards the end, a pinch of drying wood spice appears and the sweet smoky element in heightened by this.  The finish is full of malty sweet cereals and smouldering bonfire-like smoke, and hangs around for ever.  A very impressive dram, especially for the price of £29, and our favourite of the three whiskies tasted today.

Join us tomorrow for Wemyss Malts Week - Part 2, where we sample and review some more of their blended malts range.

posted by Whisky For Everyone at 7:10 PM